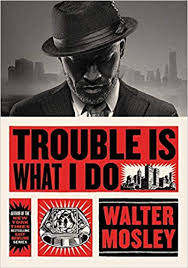 Trouble is What I Do by Walter Mosley

Walter Mosley is one of America's most celebrated and beloved writers. A Grand Master of the Mystery Writers of America, he has won numerous awards, including an Edgar Award for best novel, the Anisfield-Wolf Award, a Grammy, a PEN USA's Lifetime Achievement Award, and several NAACP Image awards.

"Spieled in a powerful, streamlined voice, this wrenching American noir will stick with readers long after the final page."-- Booklist

"Watching McGill coolly deploy the physical and intellectual skills he'd acquired in his previous life as an underworld "fixer" provides the principal pleasure of this installment, along with Mosley's own way of making prose sound like a tender, funny blues ballad...Mosley delivers enough good stuff to let you know a master's at work."-- Kirkus

"[Mosley] wanders through a few underworlds of the New York City crime category, always a treat for readers, and one that packs a moral punch. Mosley is, quite simply, an icon of detective fiction, and with each new novel in the McGill series he's making New York noir his own just as he did with Los Angeles."-- LitHub