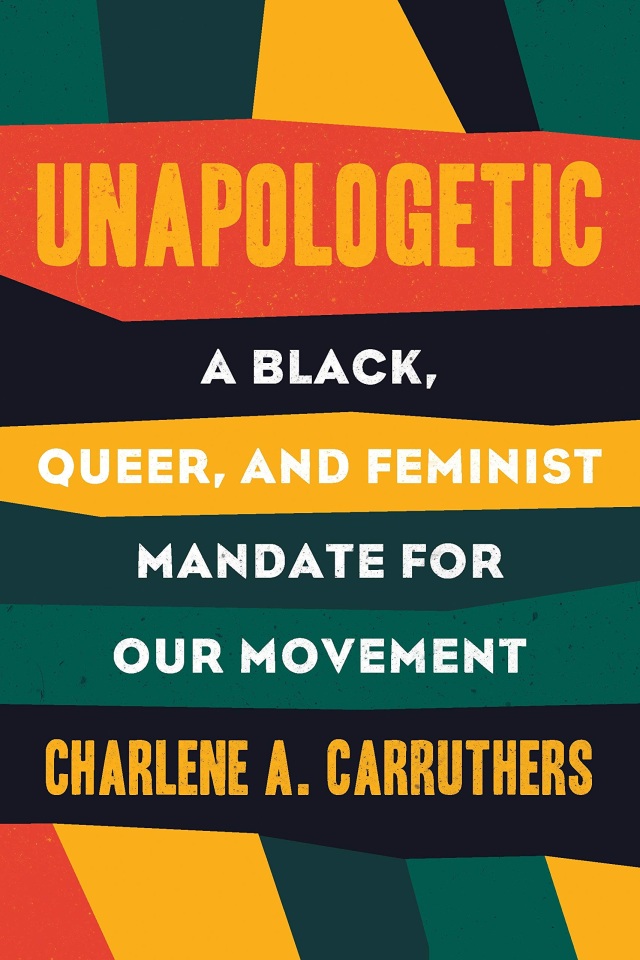 UNAPOLOGETIC - A BLACK, QUEER, AND FEMINIST MANDATE FOR OUR MOVEMENT BY CHARLENE CARRUTHERS

One of America's most influential activists, Charlene A. Carruthers has spent over a decade developing leaders as an effective strategist, community organizer, and educator. She is a Black lesbian feminist and founding national director of the BYP100 (Black Youth Project 100), a leading organization of young activists in the movement for Black liberation. Her work has been featured in outlets including the Nation, NBC News, BBC News, Huffington Post, the New Yorker, Al Jazeera, Ebony, USA Today, and the Washington Post. Carruthers was born, raised, and still resides on the South Side of Chicago.

"This handbook for the revolution is a rousing call for collective liberation."

-- Publishers Weekly, Starred Review"Timely and important, Carruthers' book is a strong testament to the resilience of the radical black liberation movement as well as an impassioned appeal to continue the fight for social justice in a political environment characterized by increasing hostility to equality and difference. Powerful, potent reading."

-- Kirkus Reviews"A powerful handbook to the contemporary black liberation movement . . . A bracing and provocative report from the front line."

-- In These Times"[ Unapologetic] does not waver in its commitment to telling hard truths or demanding justice."

-- Women's Review of Books"Charlene Carruthers carries the burden, the beauty, the wisdom of four hundred years of Black struggle. But she also brings a critical perspective and a creative vision, rooted in her extensive experience as an organizer and organic intellectual and in her fierce and fearless commitment to truth. This is an inspiring, powerful, but difficult book, because she confronts our movements, our people, our closeted silences, toxic masculinity, patriarchal violence, romantic and selective historical memory, and our future head-on, through a radical Black queer feminist lens. Welcome to the Black radical tradition."

--Robin D. G. Kelley, author of Freedom Dreams: The Black Radical Imagination"This brilliant and powerful book is a clarion call to keep alive the Black radical tradition in these reactionary times. Charlene A. Carruthers is an exemplary organic intellectual rooted in the struggles of black poor and working people, especially LGBTQ youth, with a subtle analysis and an international vision for freedom. She stands in the great lineage of Harriet Tubman, Ida B. Wells-Barnett, and Marsha P. Johnson--grand fighters and great lovers of everyday black people and oppressed folk everywhere!"

--Dr. Cornel West"Charlene Carruthers is a powerful organizer, radical thinker, paradigm-shifter, and one of the most influential political voices of her generation. Anyone seriously interested in the struggle for Black liberation in this country needs to listen carefully to what she has to say."

--Barbara Ransby, author of Ella Baker and the Black Freedom Movement and Making All Black Lives Matter"Leadership is the ability to not only make your own way but to return to give others a roadmap that they, too, can follow. This is what Charlene Carruthers does with Unapologetic. She offers us a guide to getting free with incisive prose, years of grassroots organizing experience, and a deeply intersectional lens. She doesn't forget any of us, and reminds us that bringing all of ourselves and our people with us is the only way any of us will get free."

--Janet Mock, author of Redefining Realness and Surpassing Certainty" Unapologetic serves as our marching orders. Charlene gives us not just a manual but a prayer, an intention, a critical path forward, and a deep analysis on where we've been. She educates us about community violence and state violence, and provides the clarity to show why Black liberation is crucial for us all."

--Patrisse Khan Cullors, coauthor of When They Call You a Terrorist: A Black Lives Matter Memoir" Unapologetic is a beautiful, insightful, and powerful analysis of this moment, Black movements, and Black radical futures. Both Charlene Carruthers's work as an organizer and organic intellectual and her writing in Unapologetic embody the Black radical tradition and the best of Black feminism today. Carruthers confronts the difficulties of organizing in this era, while also detailing the possibilities of collective struggle. She helps us understand the contours of a Black queer feminist future and what we all must do to get there. This is a must-read for anyone committed to freedom and liberation."

--Cathy J. Cohen, Democracy Remixed: Black Youth and the Future of American Politics"With this clear call to action, Charlene Carruthers's Unapologetic is a desperately needed analysis of the past, the present, and where we must head into the future. It's a must-read for everyone who wants deeper, honest insight into the struggles happening in our country right now, clarifying why stopping anti-Black racism, homophobia, and sexism and building transformative power intersectionally are urgent necessities for our families, communities, and the nation."

--Kristin Rowe-Finkbeiner, author, executive director and cofounder of MomsRising.org" Unapologetic is as much a narrative about collective youth-driven organizing by those affiliated with the current Movement for Black Lives as it is a story about how one young Black woman from the South Side of Chicago found herself leading one of the most consequential formations of the past decade. The book offers practical tips for organizers along with a critical analysis of the promise and pitfalls of this current iteration of the Black radical tradition. As an organizer, I found myself nodding along as I read this terrific book while taking notes to improve my own practice."

--Mariame Kaba, founder of Project NIA and cofounder of Survived & Punished"Charlene Carruthers speaks with the authenticity and authority of an organizer from the front lines of struggle. Cut from the cloth of the South Side of Chicago, Carruthers offers a critical perspective into the experience of organizing and building a movement from the inside. As an organizer, Charlene provides rare insight into the strategies, tactics, and raging debates that animate the phenomenon of Black Lives Matter. If you want to understand this movement and the people whose hands are dirty from working with the grassroots, then you need this book."

--Keeanga-Yamahtta Taylor, author of From #BlackLivesMatter to Black Liberation