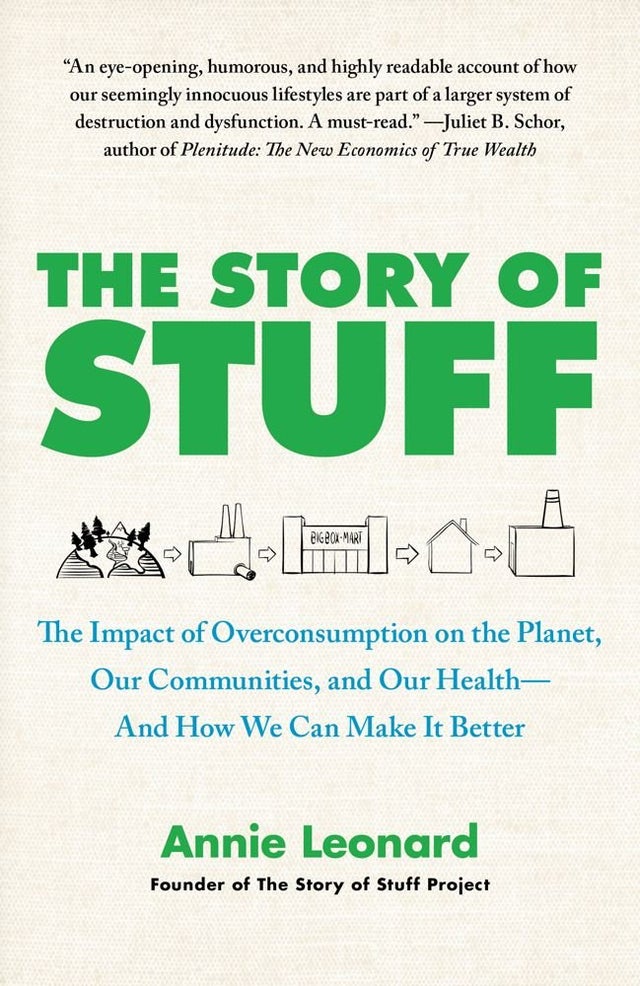 The Story of Stuff: The Impact of Overconsumption on the Planet, Our Communities, and Our Health--And How We Can Make It Better by Annie Leonard

A classic exposé in company with An Inconvenient Truth and Silent Spring, The Story of Stuff expands on the celebrated documentary exploring the threat of overconsumption on the environment, economy, and our health. Leonard examines the "stuff" we use everyday, offering a galvanizing critique and steps for a changed planet.The Story of Stuff was received with widespread enthusiasm in hardcover, by everyone from Stephen Colbert to Tavis Smiley to George Stephanopolous on Good Morning America, as well as far-reaching print and blog coverage. Uncovering and communicating a critically important idea--that there is an intentional system behind our patterns of consumption and disposal--Annie Leonard transforms how we think about our lives and our relationship to the planet. From sneaking into factories and dumps around the world to visiting textile workers in Haiti and children mining coltan for cell phones in the Congo, Leonard, named one of Time magazine's 100 environmental heroes of 2009, highlights each step of the materials economy and its actual effect on the earth and the people who live near sites like these. With curiosity, compassion, and humor, Leonard shares concrete steps for taking action at the individual and political level that will bring about sustainability, community health, and economic justice. Embraced by teachers, parents, churches, community centers, activists, and everyday readers, The Story of Stuff will be a long-lived classic.

Annie Leonard is an expert in international sustainability and environmental health issues and has written for a range of publications. She has worked for the Funders Workgroup for Sustainable Production & Consumption, Health Care Without Harm, and Essential Action and Greenpeace International. In 2008, Annie was named one of Time magazine's Heroes of the Environment. Annie currently resides in California with her daughter.