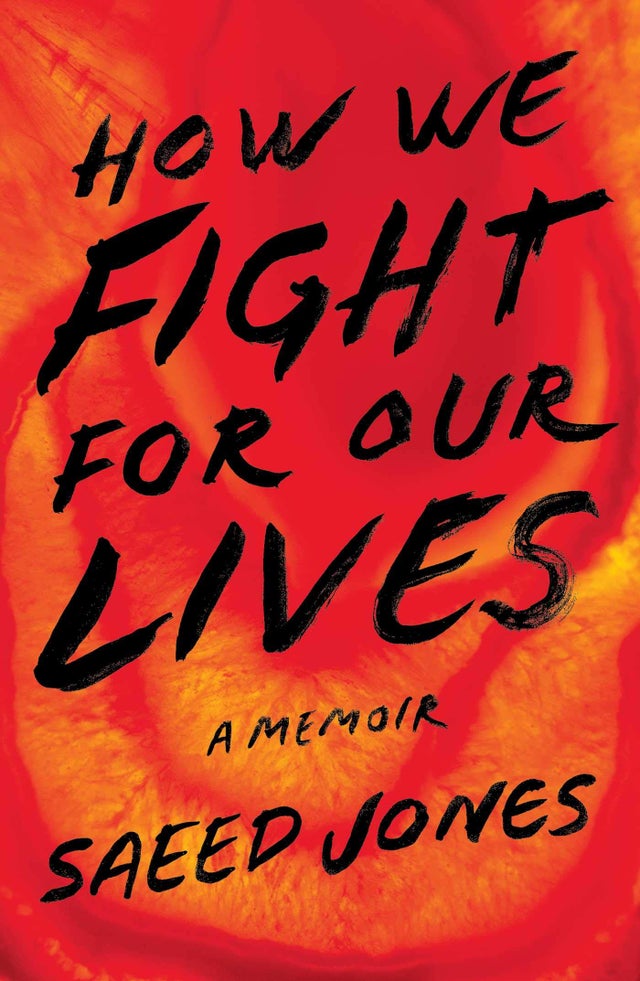 How We Fight fo our Lives by Saeed Jones

"Written from the crossroads of sex, race, and power in America, [this is a] coming-of-age memoir and a ... reflection of the nation as a whole"--

PRAISE FOR HOW WE FIGHT FOR OUR LIVES BY SAEED JONES"[A] devastating memoir....Jones is fascinated by power (who has it, how and why we deploy it), but he seems equally interested in tenderness and frailty. We wound and save one another, we try our best, we leave too much unsaid....A moving, bracingly honest memoir that reads like fevered poetry."-- THE NEW YORK TIMES BOOK REVIEW"A raw and eloquent memoir. One could say that Saeed Jones' new memoir, How We Fight for Our Lives, is a classic coming-of-age story....But Jones' voice and sensibility are so distinct that he turns one of the oldest of literary genres inside out and upside down. How We Fight for Our Lives is at once explicitly raunchy, mean, nuanced, loving and melancholy. It's sometimes hard to read and harder to put down." --MAUREEN CORRIGAN, NPR'S "FRESH AIR""Extremely personal, emotionally gritty, and unabashedly honest , How We Fight for Our Lives is an outstanding memoir that somehow manages a perfect balance between love and violence, hope and hostility, transformation and resentment.....Jones writes with the confidence of a veteran novelist and the flare of an accomplished poet. This is an important coming-of-age story that's also a collection of tiny but significant joys. More importantly, it's a narrative that cements Jones as a new literary star -- and a book that will give many an injection of hope." --NPR"Urgent, immediate, matter of fact....The prose in Saeed Jones's memoir How We Fight for Our Lives shines with a poet's desire to give intellections the force of sense impressions." --THE NEW YORKER"Jones' explosive and poetic memoir traces his coming-of-age as a black, queer, and Southern man in vignettes that heartbreakingly and rigorously explore the beauty of love, the weight of trauma, and the power of resilience." --ENTERTAINMENT WEEKLY"[Jones'] tenacious honesty compels us to be honest with ourselves. His experiences--negotiating grief, family dynamics, and a forthright identity--require our reckoning." --KIRKUS PRIZE 2019 CITATION"[This] memoir marks the emergence of a major literary voice...written with masterful control of both style and material." --KIRKUS REVIEWS (STARRED REVIEW)"Powerful...Jones is a remarkable, unflinching storyteller, and his book is a rewarding page-turner." --PUBLISHERS WEEKLY (STARRED REVIEW)"An unforgettable memoir that pulls you in and doesn't let go until the very last page." --LIBRARY JOURNAL (STARRED REVIEW)"A luminous, clear-eyed excavation of how we learn to define ourselves, "How We Fight for Our Lives" is both a coming-of-age story and a rumination on love and loss....a radiant memoir that meditates on the many ways we belong to each other and the many ways we are released."-- SAN FRANCISCO CHRONICLE"There are moments of devastating ugliness and moments of ecstatic joy...infused with an emotional energy that only authenticity can provide."-- MINNEAPOLIS STAR TRIBUNE"Phenomenal....In this profound, concise memoir, the 33-year-old writer isolates key moments from his youth and sharpens their points for maximum effect. We follow a young, searching Jones through his early years with his loving single mother, along a path of unrequited lust, furtive sexual experiences, and disapproving relatives, through his hard-won self-acceptance and into the grief of losing the person closest to him."-- INTERVIEW MAGAZINE"Jones' evocative prose has a layered effect, immersing readers in his state of mind, where gorgeous turns of phrase create some distance from his more painful memories. Although its length is short (just 189 pages), H ow We Fight For Our Lives fairly pulses with pain and potency; there is enough turmoil and poetry and determination in it to fill whole bookshelves."-- THE AV CLUB" How We Fight for Our Lives is a primer in how to keep kicking, in how to stay afloat...Thank god we get to be part of that world with Saeed Jones' writing in it."-- LAMBDA LITERARY"Jones' unabashed honesty and gift for self-aware humor will resonate with readers, especially those in search of a story that resembles their own."

--BOOKLIST"Scorching...a commentary not only on what it takes to become truly and wholly oneself, but on race and LGBTQ identity, power and vulnerability, and how relationships can make and break us along the way."

--GOOD HOUSEKEEPING"This memoir is a rhapsody in the truest sense of the word, fragments of epic poetry woven together so skillfully, so tenderly, so brutally, that you will find yourself aching in the way only masterful writing can make a person ache. How We Fight for Our Lives is that rare book that will show you what it means to be needful, to be strong, to be gloriously human and fighting for your life."

-- ROXANE GAY, author of Hunger"This book. Oh my goodness. It is everything everyone needs right now--both love song and battle cry, brilliant as fuck and at times, heartbreaking as hell. Every single living half-grown and grownup body needs to read this book. I'm shook. I'm changed."

--JACQUELINE WOODSON, author of Another Brooklyn"There will be little left to say, and so much left to make after the world experiences Saeed Jones's How We Fight for Our Lives. This is that rare piece of literary art that teaches us how to read and write on every page. It's so black. So queer. So subtextual, and amazingly so sincere. Saeed changes everything we thought we knew about memoir writing, narrative structure, and heart meat. All three are obliterated. All three are tended to over and over again. All three will never ever be the same after this book. It's really that good."

From award-winning poet Saeed Jones, How We Fight for Our Lives--winner of the Kirkus Prize and the Stonewall Book Award--is a "moving, bracingly honest memoir" (The New York Times Book Review) written at the crossroads of sex, race, and power.One of the best books of the year as selected by The New York Times; The Washington Post; NPR; Time; The New Yorker; O, The Oprah Magazine; Harper's Bazaar; Elle; BuzzFeed; Goodreads; and many more."People don't just happen," writes Saeed Jones. "We sacrifice former versions of ourselves. We sacrifice the people who dared to raise us. The 'I' it seems doesn't exist until we are able to say, 'I am no longer yours.'"Haunted and haunting, How We Fight for Our Lives is a stunning coming-of-age memoir about a young, black, gay man from the South as he fights to carve out a place for himself, within his family, within his country, within his own hopes, desires, and fears. Through a series of vignettes that chart a course across the American landscape, Jones draws readers into his boyhood and adolescence--into tumultuous relationships with his family, into passing flings with lovers, friends, and strangers. Each piece builds into a larger examination of race and queerness, power and vulnerability, love and grief: a portrait of what we all do for one another--and to one another--as we fight to become ourselves.An award-winning poet, Jones has developed a style that's as beautiful as it is powerful--a voice that's by turns a river, a blues, and a nightscape set ablaze. How We Fight for Our Lives is a one-of-a-kind memoir and a book that cements Saeed Jones as an essential writer for our time.

Saeed Jones is the author of Prelude to Bruise, winner of the 2015 PEN/Joyce Osterweil Award for Poetry and the 2015 Stonewall Book Award/Barbara Gittings Literature Award. The poetry collection was also a finalist for the 2015 National Book Critics Circle Award, as well as awards from Lambda Literary and the Publishing Triangle in 2015. Jones was born in Memphis, Tennessee, and grew up in Lewisville, Texas. He earned a BA at Western Kentucky University and an MFA at Rutgers University-Newark. He lives in Columbus, Ohio, and tweets @TheFerocity.