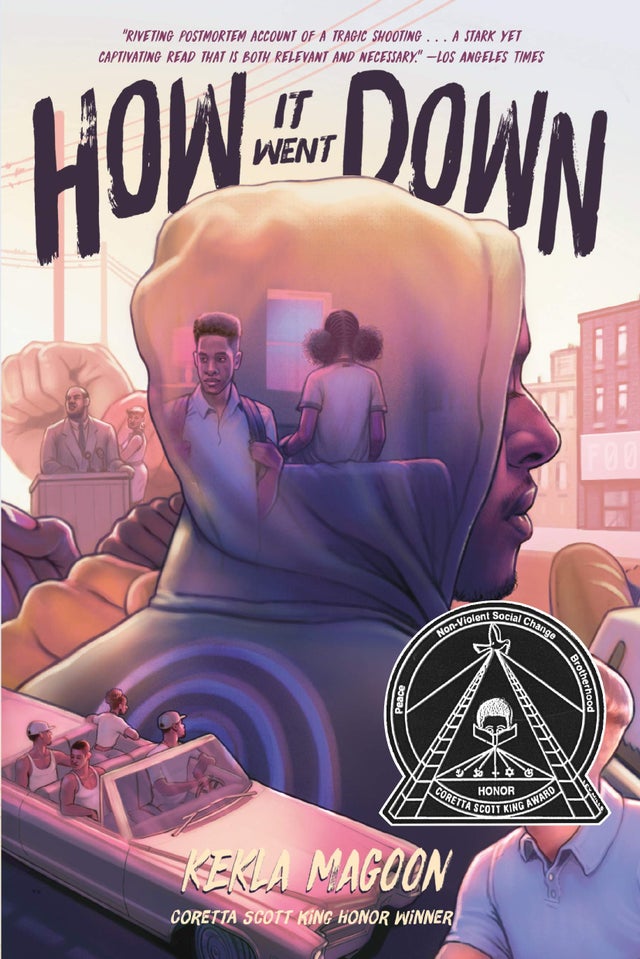 How it Went Down by Kekla Magoon

When sixteen-year-old Tariq Johnson is shot to death, his community is thrown into an uproar because Tariq was black and the shooter, Jack Franklin, is white, and in the aftermath everyone has something to say, but no two accounts of the events agree.

"The layered voices tell a story both simple and complicated, heartbreaking and maddening." -- The Chicago Tribune"Kekla Magoon's books just keep getting better....It's an important, compelling story that everyone should read, especially high school students trying to make sense of our supposed post-racial world." -- BookPage, A Teen Top Pick"In How It Went Down, Kekla Magoon deftly renders us witnesses to an all-too-common news flash in uncommon, unflinching prose. Gripping to the end." -- Rita Williams-Garcia Newbery Honor winner, National Book Award finalist, and Coretta Scott King Award winner"A hard-hitting look at the ripple effects of one act of violence on an entire community. How It Went Down is engrossing and real--it's the right book at the right time." -- Coe Booth, LA Times Book Prize winner"Thoughtful and compassionate, beautifully composed, this book takes us inside what we think we know and shows us more." -- Helen Frost, Printz Honor winner"Magoon masterfully captures the cycle of urban violence and the raw emotions of the young people who can't escape its impact." -- Publishers Weekly, starred review"* How It Went Down is a snapshot in time, a fascinating study of people caught in the crosshairs of an Event. . . . A particularly timely tale that can create dialogue and provide understanding about the decisions other people make, and the actions they take." -- VOYA, starred review"This sobering yet satisfying novel leaves readers to ponder the complex questions it raises." -- Kirkus Reviews, starred review"The many voices provide poignant insights into the forces at play in the impoverished neighborhoods, where joining a gang is tough to resist, but the various perspectives also offer compelling and plausible insights into the way perceptions and preconceptions shape narratives and affect our actions." -- BCCB"A powerful novel that will resonate with fans of Myster's Monster and Woodson's Miracle's Boys." -- The Horn Book"Kekla Magoon's How It Went Down about a black teen who is shot by a white man, is . . . just the right title for young adults grappling with the headlines streaming in every day." -- School Library Journal"Heartbreaking and unputdownable." -- School Library Journal

When sixteen-year-old Tariq Johnson dies from two gunshot wounds, his community is thrown into an uproar. Tariq was black. The shooter, Jack Franklin, is white.

In the aftermath of Tariq's death, everyone has something to say, but no two accounts of the events line up. Day by day, new twists further obscure the truth.Tariq's friends, family, and community struggle to make sense of the tragedy, and to cope with the hole left behind when a life is cut short. In their own words, they grapple for a way to say with certainty: This is how it went down.How It Went Down is a timely story by acclaimed author Kekla Magoon who won the Coretta Scott King/John Steptoe Award for The Rock and the River, and whose book X: A Novel (written with Ilyasah Shabazz) was longlisted for the National Book Award.This title has Common Core connections.

Kekla Magoon is the author of Camo Girl and The Rock and the River, winner of the Coretta Scott King/John Steptoe Award. She is a New York City-based editor, speaker, and educator. In addition to writing fiction, Kekla leads writing workshops for youth and adults, writes non-fiction titles for the education market, and is the co-editor of YA & Children's Literature for Hunger Mountain, the arts journal of Vermont College.