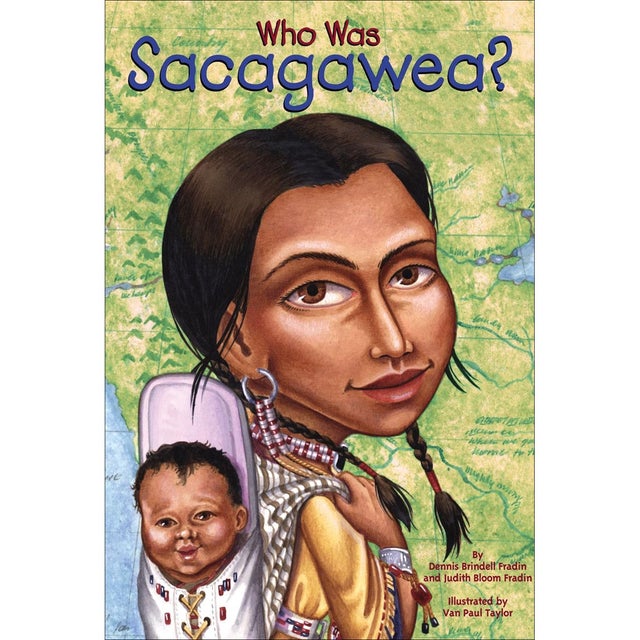 Who Was Sacagawea by Judith Bloom Fradin

A brief biography of Sacagawea, the Shoshoni woman who accompanied explorers Lewis and Clark on their expedition in the early 1800s.

Authors appear in alternate positions in some printings.

Judy Fradin is the co-author, along with her late husband Dennis, of more than 50 non-fiction children's and young adult books on topics ranging from biographies to natural disasters to African American history to the Lewis and Clark expedition. Their IDA B. WELLS: MOTHER OF THE CIVIL RIGHTS MOVEMENT won the Flora Steiglitz Straus award as well as the Golden Kite honor plaque. STOLEN INTO SLAVERY was a Carter Woodson award winner, as was THE POWER OF ONE: DAISY BATES AND THE LITTLE ROCK NINE. WHO WAS SACAGAWEA? was the Fradins' first collaboration for the WHO WAS? series. Between 2007 and 2015, Judy was a professor of Children's Literature and Minority Literature at National Louis University.The author of more than 225 children's and young adult non-fiction books, Dennis Brindell Fradin was the winner of many awards, including the Flora Steiglitz Straus best non-fiction book of the year, two Carter Woodson awards, a Golden Kite honor plaque, and three Society of Midland Authors Best Book prizes, Dennis prided himself on writing graceful, readable prose for young people. A born storyteller, the decade he spent as a second-grade teacher helped him perfect his fluid style of writing for children.

Sacagawea was only sixteen when she made one of the most remarkable journeys in American history, traveling 4500 miles by foot, canoe, and horse-all while carrying a baby on her back! Without her, the Lewis and Clark expedition might have failed. Through this engaging book, kids will understand the reasons that today, 200 years later, she is still remembered and immortalized on a golden dollar coin.