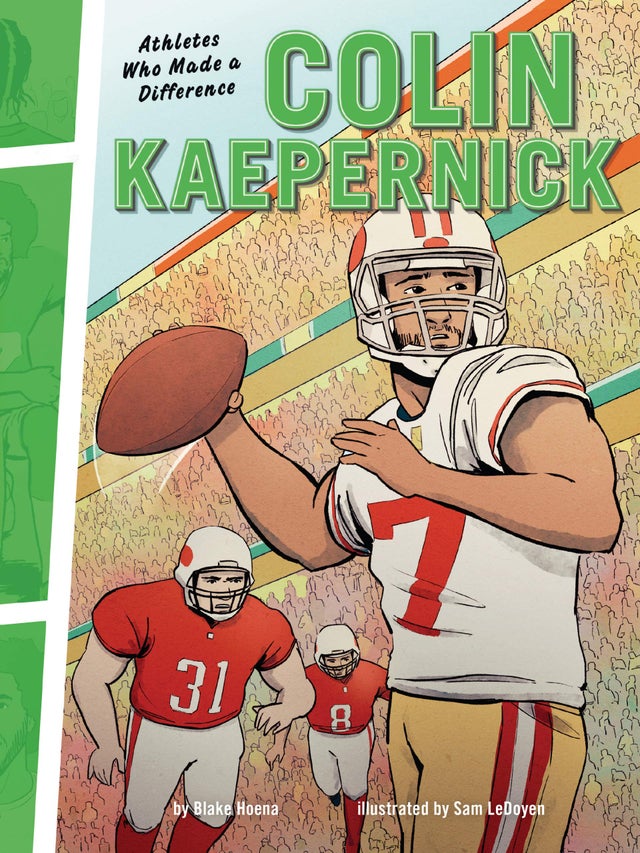 Colin Kaepernick - Athletes Who Made a Difference, by Blake Hoena

This slim graphic biography of the former NFL player begins at his birth and adoption and ends with his life as an activist.

Hoena shows Colin's childhood: Born to an unwed white mother and a black father, he is adopted as a baby into a white family. He excels academically and in sports, starting football at age 8 and standing out for his strong arm. Readers then see Kaepernick playing football, baseball, and basketball in high school. He is later recruited to play college baseball, but his heart is in football, and he finds success on the college gridiron before the San Francisco 49ers pick him in the 2011 draft. The fourth and final chapter moves from routine athletic coverage when Eric Garner and Michael Brown are killed by police. Amid Black Lives Matter protests, Kaepernick takes the stand for which he has become famous--or infamous, depending on the circle: kneeling during the national anthem at games. Reactions to his controversial actions, including the spread of #takeaknee, his exit from the league, and his work with youth occupy the final pages. Each volume in Hoena's Athletes Who Made a Difference series is structured similarly, using a graphic-novel presentation that works well to showcase the active sports and news content, although it is unfortunate that the simplified cartoon style sometimes obscures the iconic features of these famous athletes. The Kaepernick volume balances biography and sports in a way that will interest all readers, particularly in contrast with Serena Williams, also illustrated by LeDoyen, which is heavy on sports facts and offers less-satisfying biography. Rounding out the set are Jackie Robinson and Jesse Owens, both illustrated by David Shephard.