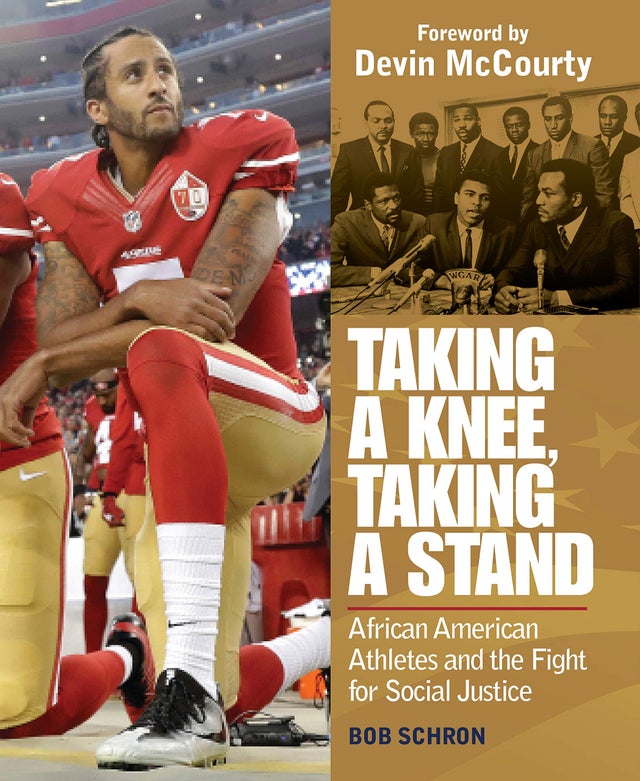 Taking a Knee, Taking a Stand by Bob Schron

Bob Schron is an Associated Press sportswriter with decades of experience and solid links to the national sports media and NBA and NFL players and coaches. He is the coauthor of M.L. Carr's autobiography, Don't Be Denied, The Bird Era, and Tom Brady: Sudden Glory. He is also recipient of the President's award for sportswriting from the Massachusetts Basketball Coaches Association.

When NFL quarterback Colin Kaepernick knelt in protest during the national anthem, he set off a firestorm of yays and nays that still burns. He also reminded us of the long and honorable tradition of athlete-activists in the African American community, captured here by veteran sports writer Schron in a crisp, impassioned narrative that moves from the quiet heroism of Jesse Owens and Joe Louis through Jackie Robinson, Muhammad Ali, and Olympic black power salutes to the Williams Sisters. Not just for sports fans; this is important history.

-- Library Journal"The history of black athletes using their prominence to take principled stands is long and admirable. In Taking a Knee, Taking a Stand, Bob Schron provides a thoughtful and comprehensive look at that history." Bob Costas, Emmy-award-winning broadcaster"At a time when African Americans in sports have been leaders in the quest for a more just and equitable nation, Bob Schron has written a fluent and knowledgeable history of their political activism over nearly a century. This book is a valuable addition to the smart sports fan's bookshelf."

Author of Breaking the Line: The Season in Black College Football

That Transformed the Sport and Changed the Course of Civil Rights." Taking a Knee, Taking a Stand is not just a book. It's a history lesson documenting the courageous path athletes from yesteryear to today have traveled in the name of social justice and racial equality. For more than a century, sports and politics have intersected, helping to shape this great country of ours. From Jesse Owens to Muhammad Ali to Colin Kaepernick and LeBron James, athletes have put their reputations and in some cases lives on the line to make a difference. Bob Schron does an excellent job detailing the impact of those social justice warriors, and why it's still just as important today for athletes to take a stand, instead of 'just shutting up and dribbling'."

A history of the activism and achievement of African American athletes from Jesse Owens to Serena Williams to Colin Kaepernick, who advanced the cause of social justice through their outspokenness, commitment, and integrity.Muhammad Ali refused to fight in a war he believed was immoral. Wilma Rudolph retired from track and field to campaign for civil rights. Colin Kaepernick took a knee during the national anthem to draw attention to the oppression of black bodies. Taking a Knee, Taking a Stand tells their stories and the stories of other prominent African American male and female athletes who often risked their careers to fight racial discrimination and promote social justice.From Jackie Robinson breaking the color line in major league baseball to NBA great Bill Russell sitting at the feet of Dr. Martin Luther King at the 1963 March on Washington to Althea Gibson asserting her tennis dominance at a time when many clubs would not allow African Americans to play on their courts, this moving and celebratory history shows how the tradition of black protest in sports has been consistent, necessary, and organic, and that the present crisis of misunderstanding and intolerance demands that this tradition continue as the country struggles toward fairness and equity.