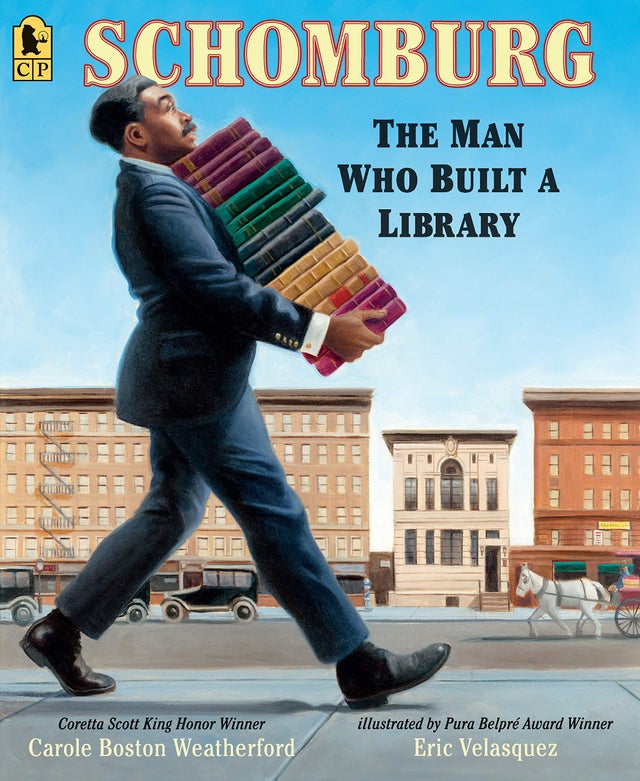 Schomburg : The Man Who Built a Library by Carole Weatherford

The remarkable life and achievements of the Afro-Puerto Rican scholar, collector and curator Arturo Schomburg have ideal chroniclers in Weatherford ('Freedom in Congo Square') and Velasquez ('Grandma's Gift').

--New York Times Book ReviewAll of the book's details paint Schomburg as an admirable, flawed, likable, passionate man whose lasting legacy, Harlem's Schomburg Center for Research in Black Culture, opens its doors to all who would learn more about the people its founder knew had been left out of the written record. A must-read for a deeper understanding of a well-connected genius who enriched the cultural road map for African-Americans and books about them.

--Kirkus Reviews (starred review)Lifelong bibliophile Arturo Schomburg would be pleased by Weatherford's prose-poem biography, which praises his passion for researching and collecting books, manuscripts, and other written materials relating black heritage and history...As with her previous book Voice of Freedom (2015), Weatherford illuminates a person well worth knowing. A rich book to add to all collections.

--Booklist (starred review)Through text and art, Weatherford and Velasquez craft a winning portrait of both collector and his collection...Schomburg's collection was donated to the New York Public Library and now boasts over 10 million items. This excellent work of history illuminates Schomburg and his legendary collection for a new generation--it belongs in all public and school libraries.

--School Library Journal (starred review)In graceful free verse, Weatherford delivers a remarkable tribute to Arturo Schomburg...Schomburg's ambitions, scholarship, and accomplishments were tremendous--"There was no field of human endeavor/ that he did not till with his determined hand"--and Weatherford and Velasquez more than do justice to them.

--Publishers Weekly (starred review)With great respect to the man's riveting life story, Caldecott and Coretta Scott King Honors author Carole Boston Weatherford relates through narrative poetry the story of Afro-Puerto Rican immigrant Arturo Schomburg. While each poem in Schomburg: The Man Who Built a Library can stand alone as a single snapshot in the literary life of Schomburg, Weatherford's portrayal of the bibliophilic law clerk is so wondrous, readers won't be able to resist turning the pages to learn more.

--Horn BookThe richness and succinctness of Weatherford's prose and Valesquez's vibrant art indicate to readers how much more there is to black history if they only started digging for themselves.

--HuffPostCarole Boston Weatherford's descriptions and Eric Velasquez's illustrations make clear how tirelessly Schomburg searched for books, pamphlets and art that could 'tell our stories, proclaim our glories'...Although he died about 80 years ago, his library in New York City is a national historic landmark, as big and bustling as ever.

In luminous paintings and arresting poems, two of children's literature's top African-American scholars track Arturo Schomburg's quest to correct history.Where is our historian to give us our side? Arturo asked.Amid the scholars, poets, authors, and artists of the Harlem Renaissance stood an Afro-Puerto Rican named Arturo Schomburg. This law clerk's life's passion was to collect books, letters, music, and art from Africa and the African diaspora and bring to light the achievements of people of African descent through the ages. When Schomburg's collection became so big it began to overflow his house (and his wife threatened to mutiny), he turned to the New York Public Library, where he created and curated a collection that was the cornerstone of a new Negro Division. A century later, his groundbreaking collection, known as the Schomburg Center for Research in Black Culture, has become a beacon to scholars all over the world.