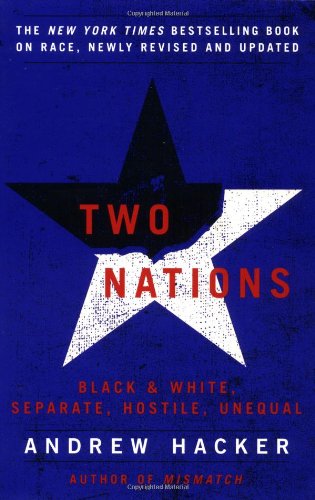 Table of ContentsPrefacePART I1. Dividing American Society2. Race and Racism: Inferiority or Equality?3. Being Black in America4. White Responses: Right and Left, Guilt and SexPART II5. Parents and Children: Do the Races Really Differ?6. The Racial Income Gap: How Much Is Due to Bias?7. Equity in Employment: Qualifications and Quotas8. Education: Ethnicity and Achievement9. Segregated Schooling: Voluntary and Imposed10. What's Best for Black Children?11. Crime: The Role Race Plays12. The Politics of RaceStatistical SourcesQuoted and Cited SourcesAcknowledgments

Why, despite continued efforts to increase understanding and expand opportunities, do black and white Americans still lead separate lives, continually marked by tension and hostility? In his much-lauded classic, newly updated to reflect the changing realities of race in our nation, Andrew Hacker explains the origins and meaning of racism and clarifies the conflicting theories of equality and inferiority. He paints a stark picture of racial inequality in America -- focusing on family life, education, income, and employment -- and explores the current controversies over politics, crime, and the causes of the gap between the races. Illuminating and oftentimes startling, Two Nations demonstrates how race has defined America's history and will continue to shape its future.