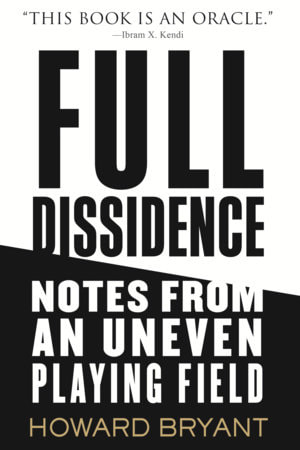 Howard Bryant is a senior writer for ESPN the Magazine and is a correspondent for NPR's Weekend Edition. He has won several awards for his commentary writing. His books include The Heritage, Juicing the Game, and The Last Hero. He lives in Northampton, Massachusetts. Connect with him at howardbryant.net and on Twitter (@hbryant42).

"A series of forceful, justifiably angry essays connected by the theme of white supremacy negating the full citizenship of black Americans . . . . Another illuminating social and cultural critique from an important contemporary voice."

-- Kirkus Reviews, Starred Review"Senior ESPN writer Bryant showcases why he is one of the most talented writers of this generation in thoughtful essays . . . [an] in-depth analysis and examination of issues. Highly recommended: Bryant is a masterful writer and a voice of this generation. His passion and analysis on important topics is unparalleled."

-- Publishers Weekly"This collection of essays is everything I hold dear, a searing rejection of everything racist America holds dear inside and outside the lines. Howard Bryant does not hold back in his withering and thoughtful dissections and rejections of the racial politics of athletics and the athletic politics of race. This book is an oracle."

--Ibram X. Kendi, How to Be an Antiracist"This book is a wonder. Bryant tells daring truths about our culture and society--and explores, in all its complexity, what it means to navigate and struggle against injustice and a deeply divided world."

--Naomi Klein, author of On Fire and This Changes Everything"Howard Bryant's writing is lucid and purposeful, weaving politics and powerful critiques of the racial and gendered hierarchies that rule the world of high-stakes professional sports throughout his gripping prose. Sports may be his starting point, but Bryant is attacking capitalist culture and its infiltration into all aspects of our lives, including the games we love to watch to get away from it all."

--Keeanga-Yamahtta Taylor, author of From #BlackLivesMatter to Black Liberation"To call Full Dissidence fiery would miss the point. Its passion is matched by precision. Howard Bryant has written a stirring tour de force that places important issues of sports in the proper context of their current times and historical precedent, and the result is a book that will be read for years to come as we try to make sense of these chaotic times."

--Bomani Jones, co-host, High Noon"This is exceptional. The facts of where we are, are laid out. Howard's opinions are not baseless or overreactions but based on facts that confirm every assertion he makes. Full Dissidence is a compelling book."

It's OK to Criticize the Military

The Worst Thing in the World

A bold and impassioned meditation on injustice in our country that punctures the illusion of a postracial America and reveals it as a place where authoritarianism looms large.Whether the issues are protest, labor, patriotism, or class division, it is clear that professional sports are no longer simply fun and games. Rather, the industry is a hotbed of fractures and inequities that reflect and even drive some of the most divisive issues in our country. The nine provocative and deeply personal essays in Full Dissidence confront the dangerous narratives that are shaping the current dialogue in sports and mainstream culture. The book is a reflection on a culture where African Americans continue to navigate the sharp edges of whiteness--as citizens who are always at risk of being told, often directly from the White House, to go back to where they came from. The topics Howard Bryant takes on include the player-owner relationship, the militarization of sports, the myth of integration, the erasure of black identity as a condition of success, and the kleptocracy that has forced America to ask itself if its beliefs of freedom and democracy are more than just words.In a time when authoritarianism is creeping into our lives and is being embraced in our politics, Full Dissidence will make us question the strength of the bonds we think we have with our fellow citizens, and it shows us why we must break from the malignant behaviors that have become normalized in everyday life.