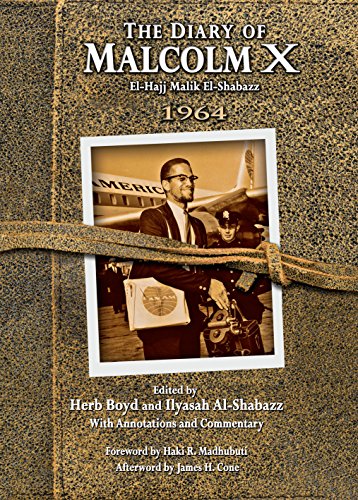 ""The Diary" permits us to travel with him [Malcolm] intimately during his Hajj, and to observe his incomprehensible commitment to establish a blueprint for peace and freedom for everyone, regardless of nationality, gender or socio-economic status. . . . As we read "The""Diary" entries, so spontaneously and yet ardently penned during the respite, we can see that Malcolm circled the globe in search of solutions for the human condition."

"Malcolm was a keen collector of keepsakes, documents, books, newspapers, film, and, of course, the record of his life. . . . this ["Diary"] is Malcolm coming of age, the ever-evolving leader and thinker, reacting to the perceptions of others with the growing realization of his own significance and singular place as a conduit from Afro-America to Africa and the Muslim world."

The Diary of Malcolm X is a transcended document. The editors, in their deliberations, careful annotations and commentary, have given us oxygen in the actual language of our brother and leader. The only question left is---- will we accept his daunting challenge.

Herb Boyd The Diary of Malcolm X Herb Boyd is a journalist, activist, teacher, and has authored or edited 23 books, including By Any Means Necessary: Malcolm X Real Not Reinvented (co-edited with Haki Madhubuti, Maulana Karenga, and Ron Daniels); and Civil Rights: Yesterday & Today. His book Baldwin's Harlem, a biography of James Baldwin, was a finalist for a 2009 NAACP Image Award. In 1995, with Robert Allen, he was a recipient of an American Book Award for Brotherman--The Odyssey of Black Men in America, an anthology. We Shall Overcome, a media-fusion book with narration by the late Ossie Davis and Ruby Dee, is used in classrooms all over the world, as is his Autobiography of a People and The Harlem Reader. His articles can be found in such publications as The Black Scholar, The Final Call, the Amsterdam News, Cineaste, Downbeat, The Network Journal, and The Daily Beast among others.

Ilyasah Al-Shabazz The Diary of Malcolm X Ilyasah Shabazz holds a Master of Science degree in education and human resource development from Fordham University. For many years she was director of Public Affairs and Special Events for the city of Mount Vernon, New York. In 2002, she, along with Kim McLarin, completed her memoir Growing Up X.

In 1964, Malcolm X (El-Hajj Malik El-Shabazz) made two trips to Africa and the Middle East. During those trips, he kept copious notes and those notes, along with editing, annotations, and commentary by Herb Boyd and Ilyasah Shabazz, comprise the whole of this remarkable diary.

"From the pages of his Diary," said his daughter Ilyasah Shabazz, "we hear his voice distilled and pure, devoid of outside interference, manipulation or intent. With his Diary, the entire world can now accurately assess the value, contribution and magnitude of Malcolm X."

And the Diary captures Malcolm in all his complexity, reveals some of his trepidations, and above all his humanity as he encountered a coterie of dignitaries, world leaders, and ordinary people who were as mesmerized by his genius as he was in wonder of the often challenging new cultures he experienced from country to country.

Readers will discover how significantly the Diary complements his autobiography, at times filling in the blanks, expanding an incident, and adding context to moments sometimes only mentioned in passing in the autobiography.

"From the pages of his Diary, we hear his voice distilled and pure, devoid of outside interference, manipulation or intent. With his Diary, the entire world can now accurately assess the value, contribution and magnitude of Malcolm X."