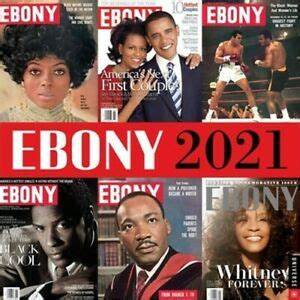 Ebony 2021 Wall Calendar celebrates the 75th anniversary of Ebony magazine. This collectible wall calendar features 36 of the most dynamic covers from this highly celebrated and revered magazine.

﻿The covers from the first black-oriented magazine in the United States to attain national circulation and No. 1 source for an authoritative perspective on the black community includes some of the 20th century's most respected African-American celebrities, newsmakers, athletes, influencers, and artists, such as Martin Luther King, Jr., Michelle and Barack Obama, Oprah Winfrey, Sidney Poitier, and more.