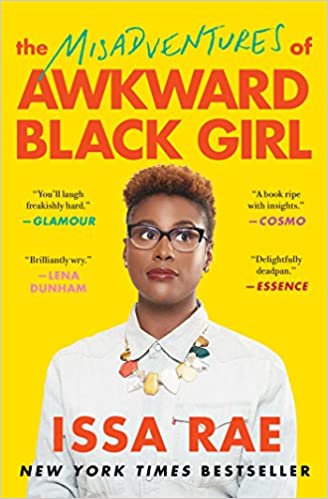 The Misadventures of an Awkward Black Girl by Issa Rae

The "brilliantly wry" (Lena Dunham) and "lovably awkward" (Mindy Kaling) New York Times bestseller from the creator of HBO's Insecure.In this universally accessible New York Times bestseller named for her wildly popular web series, Issa Rae--"a singular voice with the verve and vivacity of uncorked champagne" ( Kirkus Reviews)--waxes humorously on what it's like to be unabashedly awkward in a world that regards introverts as hapless misfits and black as cool.I'm awkward--and black. Someone once told me those were the two worst things anyone could be. That someone was right. Where do I start?Being an introvert (as well as "funny," according to the Los Angeles Times) in a world that glorifies cool isn't easy. But when Issa Rae, the creator of the Shorty Award-winning hit series The Misadventures of Awkward Black Girl, is that introvert--whether she's navigating love, the workplace, friendships, or "rapping"--it sure is entertaining. Now, in this New York Times bestselling debut collection written in her witty and self-deprecating voice, Rae covers everything from cybersexing in the early days of the Internet to deflecting unsolicited comments on weight gain, from navigating the perils of eating out alone and public displays of affection to learning to accept yourself--natural hair and all.The Misadventures of Awkward Black Girl is a book no one--awkward or cool, black, white, or other--will want to miss.

With her own unique flare and infectious sense of humor, Issa Rae's content has garnered more than twenty-five million views and more than 200,000 subscribers on YouTube. In addition to making the Forbes "30 Under 30" list twice and winning the 2012 Shorty Award for Best Web Show for her hit series The Misadventures of Awkward Black Girl, Issa Rae has worked on web content for Pharrell Williams, Tracey Edmonds, and numerous others. She developed a TV series with Shonda Rhimes for ABC and is currently developing a half-hour comedy, Insecure, for HBO. Issa has received national attention with major media outlets including The New York Times, CNN, Elle, Seventeen, Rolling Stone, VIBE, Fast Company, MSNBC, Essence, and more.