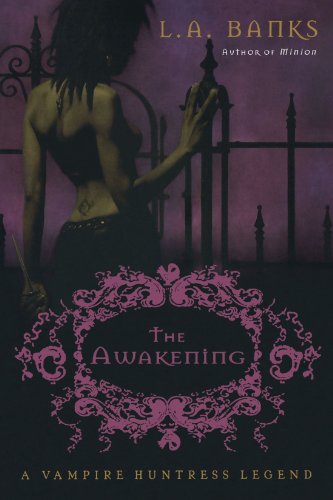 The Awakening by L. A. Banks

The second book in L. A. Banks's thrilling Vampire Huntress series featuring Damali Richards, a young African American woman who is all that stands between us and the enternal night.

There is a vampire war brewing in the underworld and at the center of it all is Damali Richards, spoken word artist and Vampire Huntress. But she is not just any Vampire Huntress, she is the millenium Neteru. A woman so potentially powerful that the vampire world is about to invoke a bloody battle that threatens to spill over onto her streets in order to posses her.It's just a matter of who will get to her first.Fallon Nuit, a rogue vampire, is one of the most powerful Damali has ever encountered and he has allied himself with the deadly Amanrath demons in order to claim her. But the Vampire Council has plans for her as well. And now an unlikely variable has entered into the equation, an ex-lover now turned vampire with an agenda of his own. And Damali must risk trusting him once more if they are to survive.

L. A. BANKS was the author of the Vampire Huntress Legend series and the Crimson Moon Novels, including Left for Undead and Never Cry Werewolf. She had a bachelor's degree from the University of Pennsylvania's Wharton School of Business and a master's in fine arts from Temple University. Banks considered herself a shape-shifter, writing romance, women's fiction, crime and suspense, and of course, dark vampire huntress lore. She lived with her daughter in Philadelphia until her death in 2011.