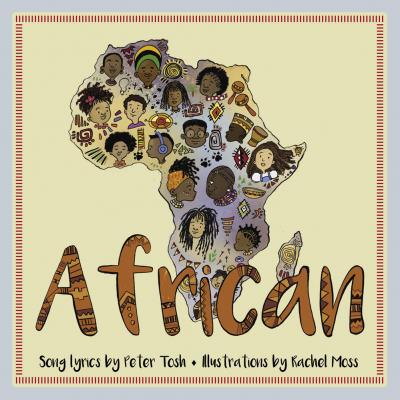 Peter Tosh is a GRAMMY Award winner and one of the best-known reggae artists of all time.

LyricPop is a children's picture book collection by LyricVerse and Akashic Books launching in June 2020. LyricPop presents your favorite song lyrics by renowned songwriters as illustrated picture books, instilling a love of music and song among young readers.

Akashic will be hiring an independent publicist to supplement our efforts for all the LyricVerse books.

In addition to his early work with Bob Marley, he also collaborated with Mick Jagger and Keith Richards of the Rolling Stones.

In Jamaica, his birthday is celebrated annually; additionally, there is a Peter Tosh Museum, a monument dedicated to him, and a square in Kingston named after him.

Tosh posthumously received one of Jamaica's highest honors, the Order of Merit.

The numerous live videos for "African" on YouTube have received hundreds of thousands of views.

Tosh's music has been covered over the years by many artists, including Eric Clapton, Jerry Garcia, Sinead O'Conner, and Cypress Hill.

Barack Obama referred to Tosh's lyrics in a speech he gave while in college.

So don't care where you come from

As long as you're a black man, you're an African

No mind your nationality

You have got the identity of an African

African is a children's book featuring lyrics by Peter Tosh and illustrations by Jamaican artist Rachel Moss. The song "African" by Peter Tosh was originally released in 1977 on his second solo record, Equal Rights. He wrote the song during a time of civil unrest in Jamaica as a reminder to all black people that they were part of the same community. The album is considered one of the most influential reggae works of all time.

A key song from the classic 1970s era of reggae

"The joyful illustrations depict young and older black people of various colors, with many different hairstyles and wearing an array of clothing styles, playing, riding, dancing, and walking...The dynamic art and text work together to form a loving ode to belonging for black people of the diaspora."

"[A] survey of Tosh's repertoire reminds us that his best works were distinctive and impactful. When the Wailers were first starting their careers at Studio One, Tosh voiced boastful classics...When the Wailers launched their own label in 1968, Tosh became the Stepping Razor, adapting a song written by the Wailers' harmony coach, Joe Higgs, and when the trio began working with visionary producer Lee 'Scratch' Perry, he recorded '400 Years, ' one of the most moving explorations of the historical injustices of slavery and its lingering aftermath...His Legalize It album was far ahead of its time in demanding the decriminalization of marijuana in 1975, while Equal Rights reminded that peace will never come without justice...[He was] one of reggae's most fiery and controversial performers, whose work remains relevant."

"Tosh's first two solo records, Legalize It and Equal Rights, are not just two of the best reggae records ever, but also two of the finest records of the '70s, period. They were inventive and deeply catchy records full of songs that could be as playful as they were defiant. Peter Tosh was always outspoken, always the rebel, but it was the way he said things--that honeyed voice, those brilliant and subtly intricate compositions--that set him apart."

Rachel Moss (illustrator) is a graphic designer in love with the bright colors and vibrant energy of the Caribbean. She was born in Jamaica and studied animation in England at the University for the Creative Arts. Moss now lives in Jamaica where she spends her days illustrating children's books such as I Am a Promise by Shelly Ann Fraser Pryce, Abigail's Glorious Hair, and Milo & Myra Learn Manners with Mr. Mongoose.