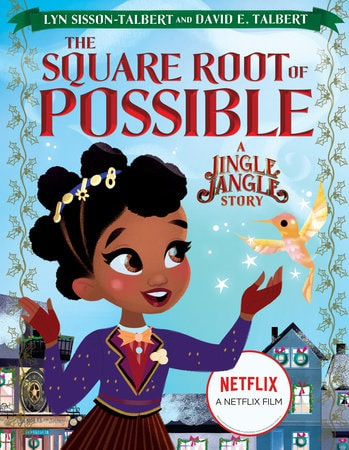 The Square Root of Possible: A Jingle Jangle Story by Lyn Sisson-Talbert

A charming picture book story based on the Netflix holiday film Jingle Jangle, starring Phylicia Rashad, Forrest Whitaker, Anika Noni Rose, Keegan Michael Key, and newcomer Madalen Mills, about an eccentric toymaker, his adventurous granddaughter, and a magical invention, that if they can get it to work in time for the holidays, could change their lives forever.A heartwarming picture book story based on the song The Square Root of Possible from the Netflix holiday film Jingle Jangle: A Christmas Journey! A holiday tale set in the snow-covered town of Cobbleton, Jingle Jangle follows eccentric toymaker Jeronicus Jangle (Academy Award winner Forest Whitaker) whose fanciful inventions burst with whimsy and wonder. But when a betrayal by a former protégé (Keegan-Michael Key) leaves Jeronicus withdrawn and down on his luck, it's up to his bright and adventurous granddaughter, Journey (newcomer Madalen Mills) -- and a singularly magical invention -- to save the day. From the imagination of writer/director David E. Talbert and featuring original music by John Legend, Philip Lawrence, and Davy Nathan, Jingle Jangle reminds you that anything is possible...if you believe.