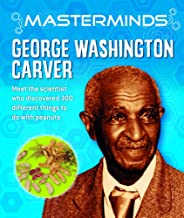 George Washington Carver was born a slave, but became one of the most prominent scientists and inventors in U.S. history. As an agricultural scientist, Carver promoted the idea of growing peanuts and sweet potatoes to be used in over a hundred different ways. He also spent his time championing various efforts in agricultural education in the South. Masterminds readers will learn how influential figures in S.T.E.A.M., like Carver, made massive contributions to their fields and how their stories and discoveries remain relevant today.