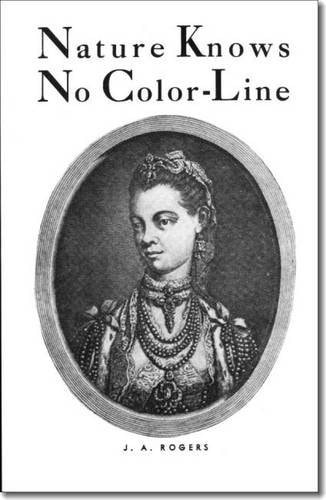 Nature Knows No Color Line by J. A. Rogers

JOEL AUGUSTUS ROGERS (September 6, 1880-March 26, 1966) was a Jamaican-American author, journalist, and historian who contributed to the history of Africa and the African diaspora, especially the history of African Americans in the United States. His research spanned the academic fields of history, sociology and anthropology. He challenged prevailing ideas about race, demonstrated the connections between civilizations, and traced African achievements. He was one of the greatest popularizers of African history in the twentieth century. Rogers addresses issues such as the lack of scientific support for the idea of race, the lack of black history being told from a black person's perspective, and the fact of intermarriage and unions among peoples throughout history. A respected historian and gifted lecturer, Rogers was a close personal friend of the Harlem-based intellectual and activist Hubert Harrison. In the 1920s, Rogers worked as a journalist on the Pittsburgh Courier and the Chicago Enterprise, and he served as the first black foreign correspondent from the United States.

"The published works of Joel Augustus Rogers are known currently to only a handful of scholars. Even those historians and anthropologists who are aware of Rogers' self-published and popular scholarly works tend only to remember him for the biographical portraits of African and African American leaders and his investigations of the history of sex and race in antiquity and in the modern era. Most contemporary college students have never heard of J.A Rogers nor are they aware of his long journalistic career and pioneering archival research. Rogers committed his life to fighting against racism and he had a major influence on black print culture through his attempts to improve race relations in the United States and challenge white supremacist tracts aimed at disparaging the history and contributions of people of African descent to world civilizations."--Thabiti Asukile, Black International Journalism, Archival Research and Black Print Culture, The Journal of African American History

In Nature Knows No Color-Line, originally published in 1952, historian Joel Augustus Rogers examines the origins of racial hierarchy and the color problem. Rogers was a humanist who believed that there were no scientifically evident racial divisions--all humans belong to one "race." He believed that color prejudice generally evolved from issues of domination and power between two physiologically different groups. According to Rogers, color prejudice was then used a rationale for domination, subjugation and warfare. Societies developed myths and prejudices in order to pursue their own interests at the expense of other groups. This book argues that many instances of the contributions of black people had been left out of the history books, and gives many examples.