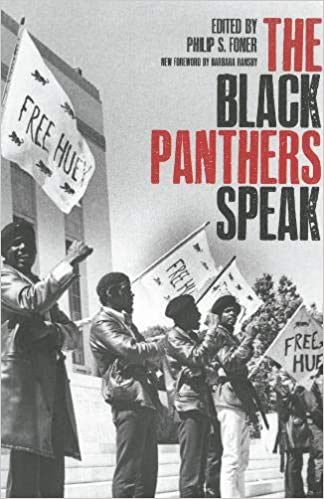 A sweeping collection of the most vital and representative writings of the Black Panther party.

Philip S. Foner was one of the most prominent Marxist historians in the United States. A prolific author and editor, he tirelessly documented the lives of workers, African Americans, and political radicals. Shut out of academic employment for a quarter century because of his political affiliations, he nonetheless helped lay the basis for the explosion of scholarship in labor and black history during the past two decades.

Barbara Ransby is an historian, writer, and longtime political activist. Ransby has published dozens of articles and essays in popular and scholarly venues. She is most notably the author of an award-winning biography of civil rights activist Ella Baker, entitled Ella Baker and the Black Freedom Movement: A Radical Democratic Vision, (University of North Carolina, 2003). She serves on the editorial board of the London-based journal, Race and Class, and a number of non-profit civic and media organizations.

; 8; Here are Huey P. Newton and Bobby Seale, Eldridge Cleaver, David Hilliard and Fred Hampton, along with Kathleen Cleaver and other Panther women. They tell of the party's court battles and acquittals; its positions on black separatism, the power structure, the police, violence and education; as well as songs, poems and political cartoons. This is the real story of The Black Panthers. The book provides a behind-the-scenes look at the Black Panther Party, without media or political input. Black Panthers Speak allows readers to judge the movement for themselves..

"Philip S. Foner was a national treasure -- scholar, activist and lover of justice."--Cornel West"The closest thing we're going to get to a rebuttal to [the] organized attempt to destroy the Panthers' legacy." --Ishmael Reed"Essential reading for those who would prefer to judge the Panther movement for themselves" -- Library Journal"The women's speeches and articles are notable for their concreteness and convincingness . . . especially [those of] Kathleen Cleaver." -- The Nation

Behind the scenes look inside the iconic Black Panther Party

Stop and frisk, police brutality, disproportionate rates of school closure, foreclosure, and incarceration have inspired many, particularly members of African American communities, to look to histories important acts of of struggle and resistance to racism. The Black Panthers Speak offers critical lessons for today's fight against racism.

Rules of the Black Panther Party

What We Want/What We Believe

2. THE BLACK PANTHER: VOICE OF THE PARTY

The Black Panther: Mirror of the People

Free by Any Means Necessary (poem)

The Power of the People

The Genius of Huey Newton

The Revolutionary Spirit of Antonio Maceo

To the Courageous Vietnamese People, Commemorating the Death of Ho Chi Minh

In Defense of Self-Defense:

The Correct Handling of a Revolution

Message on the Peace Movement

Prison, Where Is Thy Victory?

The Ten-Point Platform and Program of the Black Panther Party

Black Soldiers as Revolutionaries to Overthrow the Ruling Class

Message to Sister Erica Huggins of the Black Panther Party

The Black Man's Stake in Vietnam

An Open Letter to Stokely Carmichael

The Fascists Have Already Decided in Advance to Murder Chairman Bobby Seale in the Electric Chair: A Manifesto

The Ideology of the Black Panther Party

If You Want Peace You Got to Fight for It

You Can Murder a Liberator, but You Can't Murder LiberationContents vii

On Cultural Nationalism, by Linda Harrison

The Struggle Is a World Struggle, by Connie Matthews

I Joined the Panthers, by Joan Bird

We Will Win: Letter From Prison by Afeni Shakur

A Word for Panther Parents, by Mrs. Jewel Barker

To Feed Our Children

Why the Free Breakfast?

The Youth Make the Revolution

To Judge Murtagh: From the Panther 21

The Black Panther Party Stands for

We Must Develop a United Front

On Establishing a United Front with Communists

The Young Lords Organization on the Move: Interview with Rafael Viera

The Patriot Party Speaks to the Movement

Ten-Point Program and Platform of the Black Student Unions

The Black Panther Party and Revolutionary

Petition to the United Nations

APPENDIXESI. The Persecution of the Black Panther Party

a. The Old Rules Do Not Apply: A Survey of the

Persecution of the Black Panther Party by Charles R. Garry . . . .

c. Resolution Adopted by the New York Gr?up of the Society for Philosophy and Public Affam, May 23, 1970II. Call for Revolutionary People's Constitutional Convention, September 7, 1970, Philadelphia, Pa.III. On the Defection of Eldridge Cleaver From the Black Panther Party and the Defection of the.