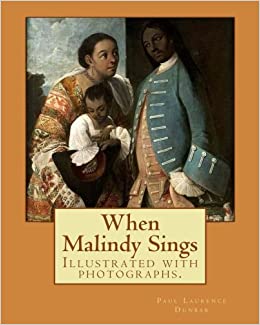 Margaret Neilson Armstrong (1867-1944) was a 20th-century American designer, illustrator, and author. She is best known for her book covers in the Art Nouveau style but also wrote and illustrated the first comprehensive guide to wildflowers of the American west. She also wrote mystery novels and biographies..... Paul Laurence Dunbar (June 27, 1872 - February 9, 1906) was an American poet, novelist, and playwright of the late 19th and early 20th centuries. Born in Dayton, Ohio, to parents who had been enslaved in Kentucky before the American Civil War, Dunbar began to write stories and verse when still a child; he was president of his high school's literary society. He published his first poems at the age of 16 in a Dayton newspaper. Much of Dunbar's more popular work in his lifetime was written in the Negro dialect associated with the antebellum South, though he also used the Midwestern regional dialect of James Whitcomb Riley. Dunbar's work was praised by William Dean Howells, a leading editor associated with the Harper's Weekly, and Dunbar was one of the first African-American writers to establish an international reputation. He wrote the lyrics for the musical comedy In Dahomey (1903), the first all-African-American musical produced on Broadway in New York. The musical later toured in the United States and the United Kingdom. Dunbar also wrote in conventional English in other poetry and novels. Since the late 20th century, scholars have become more interested in these other works. Suffering from tuberculosis, which then had no cure, Dunbar died in Dayton at the age of 33. Early life: Paul Laurence Dunbar was born at 311 Howard Street in Dayton, Ohio, on June 27, 1872, to parents who had been enslaved in Kentucky before the American Civil War. After being emancipated, his mother Matilda had moved to Dayton with other family members, including her two sons Robert and William from her first marriage. Dunbar's father Joshua had escaped from slavery in Kentucky before the war ended. He traveled to Massachusetts and volunteered for the 55th Massachusetts Infantry Regiment, one of the first two black units to serve in the war. The senior Dunbar also served in the 5th Massachusetts Cavalry Regiment. Paul Dunbar was born six months after Joshua and Matilda married on Christmas Eve, 1871. The marriage of Dunbar's parents was troubled and Dunbar's mother left Joshua soon after having their second child, a daughter.Joshua died on August 16, 1885; Paul was then 12 years old. Dunbar wrote his first poem at the age of six and gave his first public recital at the age of nine. His mother assisted him in his schooling, having learned to read expressly for that purpose. She often read the Bible with him, and thought he might become a minister in the African Methodist Episcopal Church. It was the first independent black denomination in America, founded in Philadelphia in the early 19th century. Dunbar was the only African-American student during his years at Central High School in Dayton; Orville Wright was a classmate and friend. Well-accepted, he was elected as president of the school's literary society, and became the editor of the school newspaper and a member of the debate club.