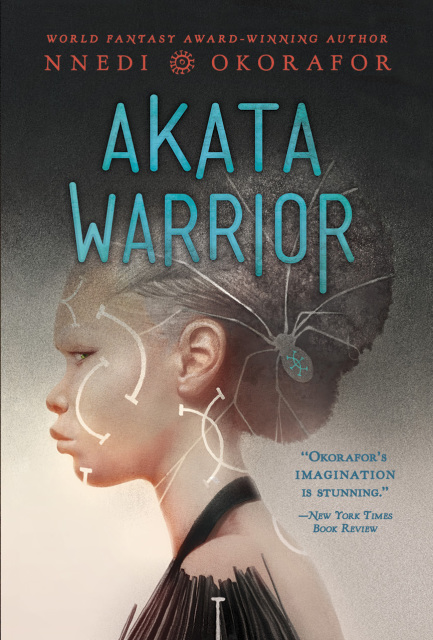 Brief Description:Now stronger, feistier, and a bit older, Sunny Nwazue, along with her friends from the the Leopard Society, travel through worlds, both visible and invisible, to the mysterious town of Osisi, where they fight in a climactic battle to save humanity.

Nnedi Okorafor is a novelist of African-based science fiction, fantasy, and magical realism for both children and adults. Born in the United States to Nigerian immigrant parents, Nnedi is known for weaving African culture into creative evocative settings and memorable characters. In a profile of Nnedi's work, the New York Times called Nnedi's imagination "stunning." Nnedi has received the World Fantasy Award, the Hugo Award, and the Nebula Award, among others, for her novels. Her fans include Rick Riordan, John Green, Laurie Halse Anderson, and Ursula K. Le Guin among others.

Nnedi Okorafor holds a PhD in English and is a professor at SUNY Buffalo. She divides her time between Buffalo and the suburbs of Chicago, where she lives with her daughter. Learn more at nnedi.com or follow her on Twitter @nnedi.

"There's more imagination on a page of Nnedi Okorafor's work than in whole volumes of ordinary fantasy epics." --Ursula K. Le Guin, award-winning author of A Wizard of Earthsea

"I always loved science fiction, but I didn't feel I was part of it--until I read first Octavia Butler, and now Nnedi Okorafor." --Whoopi Goldberg

"Fresh, original, and smart. We need more writers like her." --Patrick Rothfuss, author of The Name of the Wind

"The voice of Nnedi Okorafor does not obey the rules of distance, time, or place. Hers is the voice that fuses matter and imagination. She shows us just how close we are to that alternate reality." --Tchidi Chikere, Nigerian award-winning film director and screenwriter