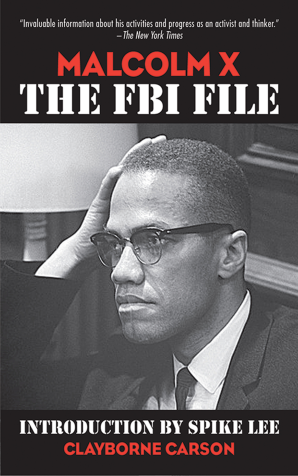 The FBI has made possible a reassembling of the history of Malcolm X that goes beyond any previous research. From the opening of his file in March of 1953 to his assassination in 1965, the story of Malcolm X's political life is a gripping one. Shortly after he was released from a Boston prison in 1953, the FBI watched every move Malcolm X made. Their files on him totaled more than 3,600 pages, covering every facet of his life. Viewing the file as a source of information about the ideological development and political significance of Malcolm X, historian Clayborne Carson examines Malcolm's relationship to other African-American leaders and institutions in order to define more clearly Malcolm's place in modern history.

With its sobering scrutiny of the FBI and the national policing strategies of the 1950s and 1960s, Malcolm X: The FBI File is one of a kind: never before has there been so much material on the assassination of Malcolm X in one conclusive volume.