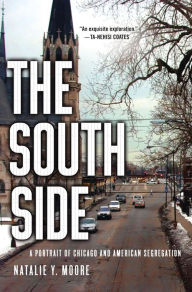 The South Side: A Portrait Of Chicago and American Segregation by Natalie Y. Moore

A Portrait of Chicago and

The author documents the various ways in which the racial segregation of Chicago's neighborhoods has come to define this Midwestern city. The author believes that institutional racism, more than the class of the city's residents, has made it difficult for African Americans to advance in life, as other groups have done historically.

NATALIE Y. MOORE is the South Side bureau reporter for WBEZ, the NPR-member station in Chicago. Before joining WBEZ, she covered Detroit City Council for Detroit News. She worked as an education reporter for the St. Paul Pioneer Press and a reporter for the Associated Press in Jerusalem. Her work has been published in Essence, Black Enterprise, the Chicago Reporter, In These Times, the Chicago Sun-Times and the Chicago Tribune. She was awarded the 21st Century Award from the Chicago Public Library and Foundation in 2017. She lives in Chicago