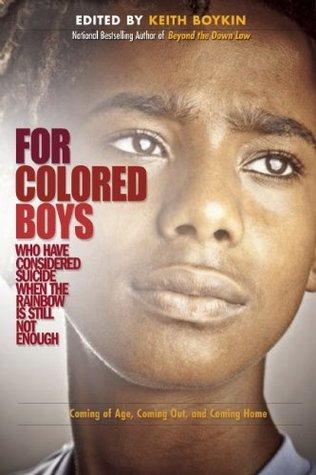 For Colored Boys Who Have Considered Suicide When the Rainbow Is Still Not Enough: Coming of Age, Coming Out, and Coming Home

New York Times bestselling author and CNBC commenter Keith Boykin expands on the "It Gets Better" project by bringing together 25 essays by men of color on the topic of surviving growing up gay. In 1974, playwright Ntozake Shange published a choreopoem called For Colored Girls Who Have Considered Suicide When The Rainbow Is Enuf. The book/play/poetry would go on to inspire legions of women for decades and would later become the subject and title of a hugely popular movie in the fall of 2010. While the film was selling out movie theaters, young black gay men were literally committing suicide in the silence of their own communities. In the same time period, a young Rutgers University student named Tyler Clementi took his own life after a roommate secretly videotaped him in an intimate setting with another young man. In response, syndicated columnist and author Dan Savage created a YouTube video with his partner Terry to inspire young people facing harassment. Their message, It Gets Better, turned into a popular movement, inspiring thousands of user-created videos on the Internet. Savage's project targeted people of all races, backgrounds and colors, but Boykin has created something special "for colored boys." The new book responds to the crisis of youth development and suicide in the black community, and more specifically among young gay men of color. For Colored Boys is designed to educate and inspire those seeking to overcome obstacles in their lives. About the Author Keith Boykin is the editor of The Daily Voice online news site, a CNBC contributor, a BET TV host and a New York Times best-selling author of three books. Educated at Dartmouth and Harvard, Keith attended law school with President Barack Obama and served in the White House as a special assistant to President Bill Clinton. Keith was a star on the 2004 Showtime television series American Candidate and has since appeared on numerous national media programs, including Anderson Cooper 360, The O'Reilly Factor, The Tyra Banks Show, The Montel Williams Show, Judge Hatchett and The Tom Joyner Morning Show. He lives in New York.