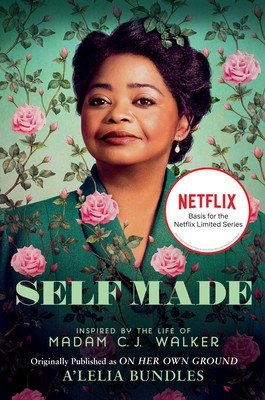 Self Made: Inspired by the Life of Madam C.J. Walker (Media Tie-In)

Originally Published as On Her Own Ground

Bundles, a journalist and great-great-granddaughter of Madam C.J. Walker, offers a lively portrait of an American businesswoman. Walker, the first freeborn child of slaves, rose from poverty to establish a successful hair-care business, became one of the wealthiest women in the United States, and devote herself to a life of activism and philanthropy toward race and women's issues. 16 page photo insert.

The daughter of formerly enslaved parents, Sarah Breedlove—who would become known as Madam C. J. Walker—was orphaned at seven, married at fourteen, and widowed at twenty. She spent the better part of the next two decades laboring as a washerwoman for $1.50 a week. Then—with the discovery of a revolutionary hair care formula for black women—everything changed. By her death in 1919, Walker managed to overcome astonishing odds: building a storied beauty empire from the ground up, amassing wealth unprecedented among black women, and devoting her life to philanthropy and social activism. Along the way, she formed friendships with great early-twentieth-century political figures such as Ida B. Wells, Mary McLeod Bethune, W.E.B. Du Bois, and Booker T. Washington.