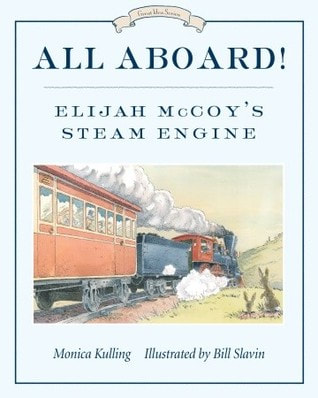 All Aboard - Elijah McCoy's Steam by Monica Kulling

In the second of Tundra's Great Idea Series, biographies for children who are just starting to read, Monica Kulling presents the life of an extraordinary man. There were few opportunities for the son of slaves, but Elijah McCoy's dreams led him to study mechanical engineering in Scotland. He learned everything there was to know about engines - how to design them and how to build them. But when he returned to the United States to look for work at the Michigan Central Railroad, the only job Elijah could get was shoveling coal into a train's firebox. Undaunted, he went on to invent a means of oiling the engine while the train was running, changing the face of travel around the world. With playful text and lively illustrations, All Aboard! Elijah McCoy's Steam Engine may be the first biography a child discovers, and it will whet the appetite for many more.