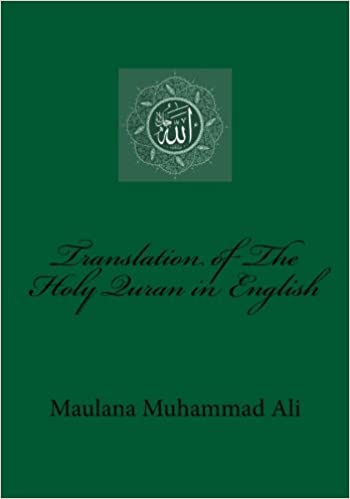 Translation of The Holy Quran in English And Ali, Maulana Muhammad

The Quran, literally meaning "the recitation", also romanised (Koran) is the central religious text of Islam, which Muslims believe to be a revelation from God (Arabic: Allah). It is widely regarded as the finest piece of literature in the Arabic language. Muslims consider the Quran to be the only book that has been protected by God from distortion or corruption. Quranic chapters are called suras and verses are called ayahs. Muslims believe that the Quran was verbally revealed from God to Muhammad through the angel Gabriel (Jibril), gradually over a period of approximately 23 years, beginning on 22 December 609 CE, when Muhammad (Peace be upon Him) was 40, and concluding in 632 CE, the year of his death. Shortly after Muhammad's death, the Quran was collected by his companions using written Quranic materials and everything that had been memorized of the Quran. Muslims regard the Quran as the most important miracle of Muhammad, the proof of his prophet hood and the culmination of a series of divine messages that started with the messages revealed to Adam and ended with Muhammad. The Quran assumes familiarity with major narratives recounted in the Jewish and Christian scriptures. It summarizes some, dwells at length on others and, in some cases, presents alternative accounts and interpretations of events. The Quran describes itself as a book of guidance. It sometimes offers detailed accounts of specific historical events, and it often emphasizes the moral significance of an event over its narrative sequence. The Quran is used along with the hadith to interpret sharia law. During prayers, the Quran is recited only in Arabic. Someone who has memorized the entire Quran is called a hafiz. Some Muslims read Quranic ayahs (verses) with elocution, which is often called tajweed. During the month of Ramadan, Muslims typically complete the recitation of the whole Quran during tarawih prayers. Inimitability of the Quran (or "I'jaz") is the belief that no human speech can match the Quran in its content and form. The Quran is considered an inimitable miracle by Muslims, effective until the Day of Resurrection-and, thereby, the central proof granted to Muhammad in authentication of his prophetic status. The concept of inimitability originates in the Quran where in five different verses challenges opponents to produce something like the Quran: "If men and sprites banded together to produce the like of this Quran they would never produce its like not though they backed one another" (17:88). So the suggestion is that if there are doubts concerning the divine authorship of the Quran come forward and create something like it. From the ninth century, numerous works appeared which studied the Quran and examined its style and content. Medieval Muslim scholars including al-Jurjani (d. 1078CE) and al-Baqillani (d. 1013CE) have written treatises on the subject, discussed its various aspects, and used linguistic approaches to study the Quran. Others argue that the Quran contains noble ideas, has inner meanings, maintained its freshness through the ages and has caused great transformations in individual level and in the history. Some scholars state that the Quran contains scientific information that agrees with modern science. The doctrine of miraculousness of the Quran is further emphasized by Muhammad's illiteracy since the unlettered prophet could not have been suspected of composing the Quran.