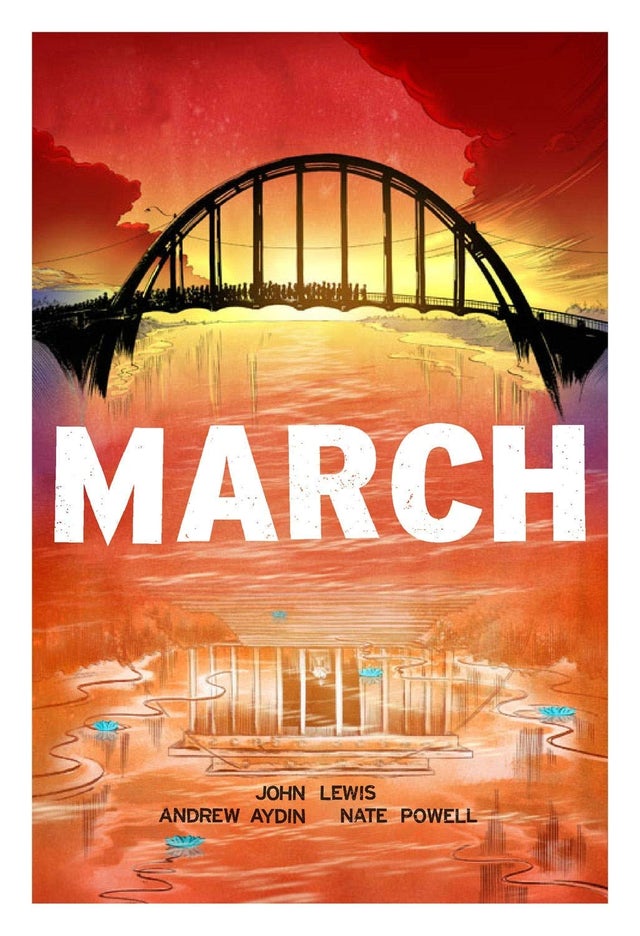 March is a vivid first-hand account of John Lewis' lifelong struggle for civil and human rights, meditating in the modern age on the distance traveled since the days of Jim Crow and segregation. Rooted in Lewis' personal story, it also reflects on the highs and lows of the broader civil rights movement. Book one spans Lewis' youth in rural Alabama, his life-changing meeting with Martin Luther King, Jr., the birth of the Nashville Student Movement, and their battle to tear down segregation through nonviolent lunch counter sit-ins, building to a stunning climax on the steps of City Hall. Book two takes place after the Nashville sit-in campaign. His commitment to justice and nonviolence has taken him from an Alabama sharecropper's farm to the halls of Congress, from a segregated schoolroom to the 1963 March on Washington D.C., and from receiving beatings from state troopers, to receiving the Medal of Freedom awarded to him by Barack Obama, the first African-American president. Book three goes back in time to when Lewis is 25 years old and is chairman of the Student Nonviolent Coordinating Committee. To carry out their nonviolent revolution, Lewis and an army of young activists launch a series of innovative campaigns, including the Freedom Vote, Mississippi Freedom Summer, and an all-out battle for the soul of the Democratic Party waged live on national television.

Congressman John Lewis was a leader in the American Civil Rights Movement. He was chairman of the Student Nonviolent Coordinating Committee (SNCC) and played a key role in the struggle to end segregation. Despite more than 40 arrests, physical attacks, and serious injuries, John Lewis remained a devoted advocate of the philosophy of nonviolence. He is co-author of the first comics work to ever win the National Book Award, the #1 New York Times bestselling graphic novel memoir trilogy MARCH, written with Andrew Aydin and illustrated by Nate Powell. He is also the recipient of numerous awards from national and international institutions including the Lincoln Medal, the John F. Kennedy "Profile in Courage" Lifetime Achievement Award, and the NAACP Spingarn Medal, among many others. He lives in Atlanta, GA.Andrew Aydin is creator and co-author of the #1 New York Times best-selling graphic memoir series, MARCH. Co-authored with Rep. Lewis and illustrated by Nate Powell, MARCH is the first comics work to ever win the National Book Award, and is a recipient of the Will Eisner Comics Industry Award, the Robert F. Kennedy Book Award Special Recognition, and the Coretta Scott King Book Award Author Honor, among other honors. Aydin's other comics work includes writing the X-Files Annual 2016 (IDW), writing for the CBLDF Liberty Annual 2016 (Image), and writing an upcoming issue of Bitch Planet (Image).Nate Powell is a New York Times best-selling graphic novelist born in Little Rock, Arkansas in 1978. He began self-publishing at age 14, and graduated from School of Visual Arts in 2000. His work includes MARCH, You Don't Say, Any Empire, Swallow Me Whole, The Silence Of Our Friends, The Year Of The Beasts, and Rick Riordan's The Lost Hero. Powell is the first and only cartoonist ever to win the National Book Award. Powell has discussed his work at the United Nations, as well as on MSNBC's The Rachel Maddow Show and CNN.