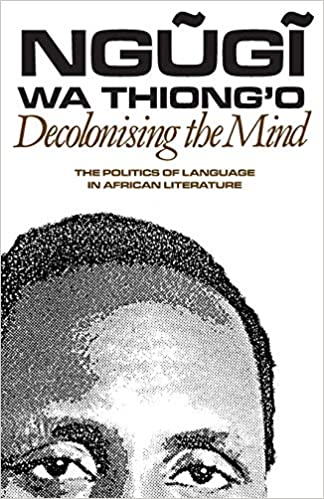 Decolonising the Mind: The Politics of Language in African Literature by Ngugi Wa Thiong o

Many of the ideas are familiar from Ngugi's earlier critical books, and earlier lectures, elsewhere. But the material here has a new context and the ideas a new focus. This leading African writer presents the arguments for using African language and forms after successfully using an African language himself. - Anne Walmsley in THE GUARDIAN ... after 25 years of independence, there is beginning to emerge a generation of writers for whom colonialism is a matter of history and not of direct personal experience. In retrospect that literature characterised by Ngugi as Afro-European - the literature written by Africans in European languages - will come to be seen as part and parcel of the uneasy period between colonialism and full independence, a period equally reflected in the continent's political instability as it attempts to find its feet. Ngugi's importance - and that of this book - lies in the courage with which he has confronted this most urgent of issues. - Adewale Maja-Pearce in THE NEW STATESMAN