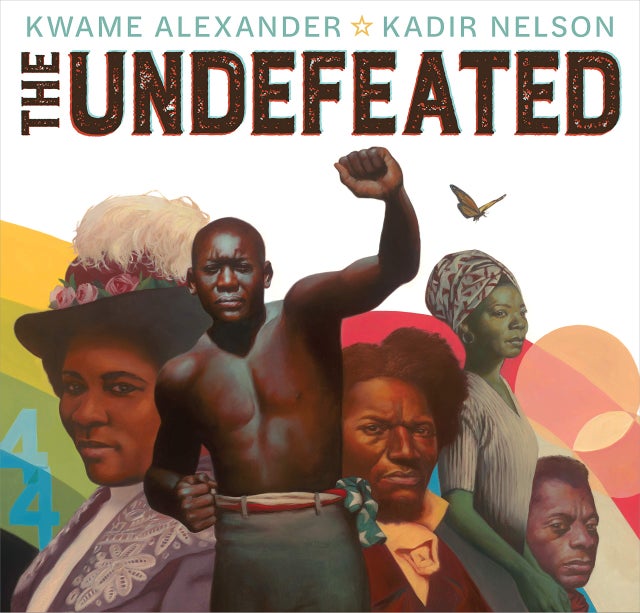 The Undefeated by Kwame Alexander

Winner of the 2020 Caldecott Medal

Winner of the 2020 Coretta Scott King Illustrator AwardThe Newbery Award-winning author of THE CROSSOVER pens an ode to black American triumph and tribulation, with art from a two-time Caldecott Honoree.

Originally performed for ESPN's The Undefeated, this poem is a love letter to black life in the United States. It highlights the unspeakable trauma of slavery, the faith and fire of the civil rights movement, and the grit, passion, and perseverance of some of the world's greatest heroes. The text is also peppered with references to the words of Martin Luther King, Jr., Langston Hughes, Gwendolyn Brooks, and others, offering deeper insights into the accomplishments of the past, while bringing stark attention to the endurance and spirit of those surviving and thriving in the present. Robust back matter at the end provides valuable historical context and additional detail for those wishing to learn more.

Kwame Alexander is a poet, educator, and the New York Times Bestselling author of more than 35 books, including Rebound, the follow-up to his, Newbery medal-winning middle grade novel, The Crossover. Some of his other works include Booked, which was longlisted for the National Book Award, The Playbook: 52 Rules to Help You Aim, Shoot, and Score in this Game of Life, Swing, and the picture books, Out of Wonder and The Undefeated, which was longlisted for the National Book Award, and won the Caldecott Medal, a Newbery Honor, and the Coretta Scott King Illustrator Award.

A regular contributor to NPR's Morning Edition, Kwame is the recipient of numerous awards, including The Coretta Scott King Author Honor, The NCTE/Charlotte Huck Honor, Three NAACP Image Award Nominations, and the 2017 Inaugural Pat Conroy Legacy Award. He believes that poetry can change the world, and he uses it to inspire and empower young people around the world through The Write Thing, his K-12 Writing Workshop. Kwame is the founder of Versify, an imprint of Houghton Mifflin Harcourt.

Kadir Nelson is a two-time Caldecott Honor recipient. Among his other awards are an NAACP Image Award, and the 2009 and 2014 Coretta Scott King Author Award. His work has appeared in The New York Times, Sports Illustrated, and The New Yorker. He lives in Los Angeles, CA.www.kadirnelson.com