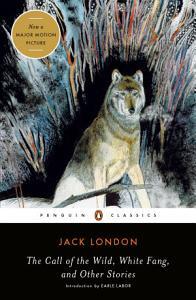 Jack London--his real name was John Griffith London--had a wild and colorful youth on the waterfront of Oakland, his native city. Born in 1876, he left school at the age of fourteen and worked in a cannery. By the time he was sixteen he had been both an oyster pirate and a member of the Fish Patrol in San Francisco Bay. He later wrote about these experiences in The Cruise of the Dazzler (1902) and Tales of the Fish Patrol (1905). In 1893 he joined a sealing cruise that took him as far as Japan. Returning to the United States, he traveled throughout the country. He was determined to become a writer and read voraciously. After a brief period of study at the University of California at Berkeley he joined the gold rush to the Klondike in 1897. He returned to San Francisco the following year. His short stories of the Yukon were published in Overland Monthly (1898) and the Atlantic Monthly (1899), and in 1900 his first collection, The Son of the Wolf, appeared, bringing him national fame. In 1902 he went to London, where he studied the slum conditions of the East End. He wrote about this experience in The People of the Abyss (1903). His life was exciting and eventful. There were sailing voyages to the South Seas and around Cape Horn. He reported on the Russo-Japanese War for the Hearst papers and gave lecture tours. A prolific writer, he published an enormous number of stories and novels. Besides two revealing memoirs, The Road (1907) and John Barleycorn (1913), he authored several collections of short stories, including Love of Life (1907), Lost Face (1910), and On the Makaloa Mat (1919). He also wrote many novels, including The Call of the Wild (1903), The Sea-Wolf (1904), White Fang (1906), Before Adam (1907), The Iron Heel (1908), Martin Eden (1909), and The Star Rover (1915). Jack London died in 1916, at his famous Beauty Ranch in California. Earle Labor is the acknowledged major authority on the novelist Jack London and the curator of the Jack London Museum and Research Center in Shreveport. He is also Emeritus Professor of American Literature at Centenary College of Louisiana.Kenneth K. Brandt is Professor of Liberal Arts at the Savannah College of Art and Design. He is the editor of The Call: The Magazine of the Jack London Society and is the executive coordinator of the Jack London Society (jacklondonsociety.org). He is the author of Jack London: Writers and Their Work (Liverpool University Press) and the co-editor, with Jeanne Campbell Reesman, of Approaches to Teaching the Works of Jack London (Modern Language Association).

A bold mix of realism, allegory, adventure, and progressive politics, this collection features Jack London's most profound and moving literary worksThe Call of the Wild, London's elemental masterpiece about a dog learning to survive in the wilderness, sees pampered pet Buck snatched from his home and set to work as a sled-dog during the Klondike Gold Rush. White Fang, set in the frozen tundra and boreal forests of Canada's Yukon territory, is the story of a wolf-dog hybrid struggling to survive in a human society every bit as brutal as the natural world. This volume of London's famed Northland novels also includes an early feminist story "The Night-Born," and a pro-labor story "South of the Slot." These works echo and enrich the themes of The Call of the Wild and White Fang with their unique emphases on the primordial, the instinctual, and the quest for social justice. London's narratives in this volume focus on issues of continuing relevance to contemporary readers, including the value of the wilderness, animal rights, socioeconomic oppression, and gender inequity. This edition also includes an introduction by preeminent London scholar, Earle Labor, as well as a comprehensive biographical note on London's life and works by scholar and executive coordinator of the Jack London Society, Kenneth K. Brandt.For more than seventy years, Penguin has been the leading publisher of classic literature in the English-speaking world. With more than 1,700 titles, Penguin Classics represents a global bookshelf of the best works throughout history and across genres and disciplines. Readers trust the series to provide authoritative texts enhanced by introductions and notes by distinguished scholars and contemporary authors, as well as up-to-date translations by award-winning translators.