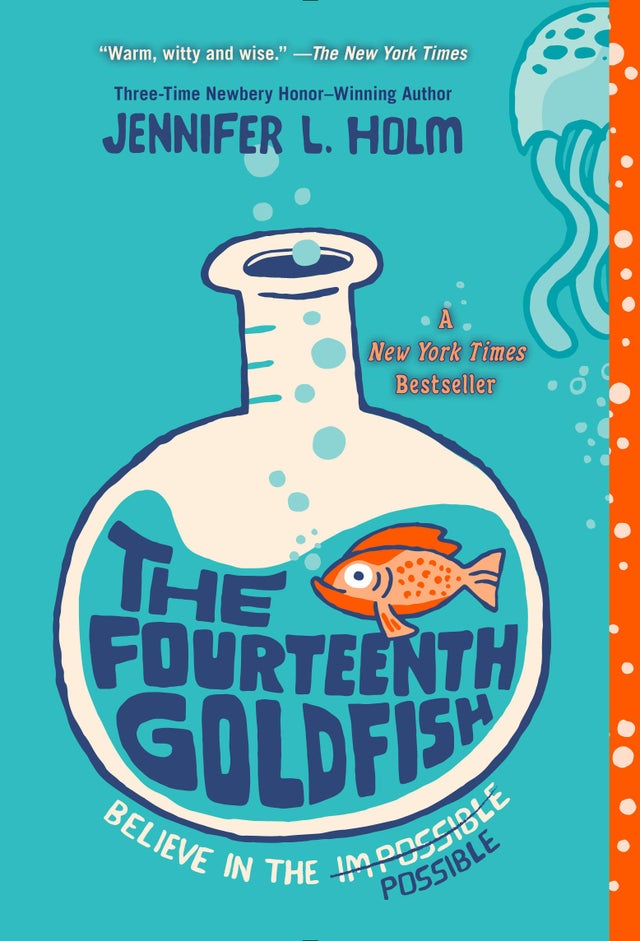 The Fourteenth Goldfish by Jennifer Holm

The Bulletin of the Center for Children's Books, September 2014:

"Holm's writing is crisp, accessible, and well paced, and her enthusiasm for science and its impact emerges clearly and consistently but not overbearingly, with clear, appreciative nods to the world of theater and its purpose in our lives. Indeed, this novel explores weighty elements of human existence with a light touch, allowing readers to engage with the issues at multiple levels; an excellent appendix of recommended readings encourages exploration and dialogue. This novel would make an ideal classroom read aloud, particularly to expose students to the rich and rewarding STEM fields."

Believe in the possible . . . with this New York Times bestseller by three-time Newbery Honor winner Jennifer L. Holm. A perfect read about a child's relationship with her grandfather!

Galileo. Newton. Salk. Oppenheimer. Science can change the world . . . but can it go too far?Eleven-year-old Ellie has never liked change. She misses fifth grade. She misses her old best friend. She even misses her dearly departed goldfish. Then one day a strange boy shows up. He's bossy. He's cranky. And weirdly enough . . . he looks a lot like Ellie's grandfather, a scientist who's always been slightly obsessed with immortality. Could this gawky teenager really be Grandpa Melvin? Has he finally found the secret to eternal youth?With a lighthearted touch and plenty of humor, Jennifer Holm celebrates the wonder of science and explores fascinating questions about life and death, family and friendship, immortality . . . and possibility. Look for EXCLUSIVE NEW MATERIAL in the paperback--including Ellie's gallery of scientists and other STEM-appropriate features.And don't miss the much-anticipated sequel, The Third Mushroom!"Warm, witty, and wise." -- The New York Times* "Written in a clean, crisp style, with lively dialogue and wit, this highly accessible novel will find a ready audience." -- Booklist, Starred* "Top-notch middle-grade fiction." -- Publishers Weekly, Starred* "Ellie's memorable journey into the world of science will inspire readers to explore the world around them and celebrate the possible." -- Shelf Awareness, Starred"Awesomely strange and startlingly true-to-life. It makes you wonder what's possible." --Rebecca Stead, Newbery Medal-winning author of When You Reach Me