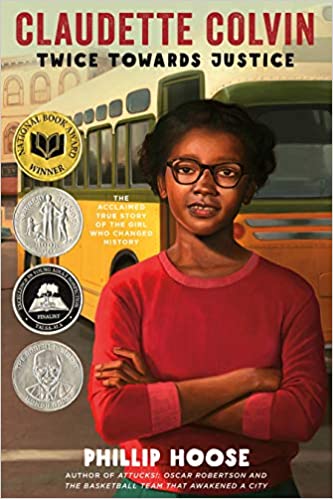 "Hoose's book, based in part on interviews with Colvin and people who knew her--finally gives her the credit she deserves." --The New York Times Book Review

"History might have forgotten Claudette Colvin, or relegated her to footnote status, had writer Phillip Hoose not stumbled upon her name in the course of other research and tracked her down. . . .The photos of the era are riveting and Claudette's eloquent bravery is unforgettable." -- The Wall Street Journal"Before Rosa Parks, there was Claudette Colvin, a teenager who knew her constitutional rights and was willing to be arrested to prove it" -- The Washington Post, a Best Book of 2009 selection"Compelling." -- New York Daily News"Hoose vividly recreates Colvin's bravery." -- The New York Post"Hoose makes the moments in Montgomery come alive, whether it's about Claudette's neighborhood, her attorneys, her pastor or all the different individuals in the civil rights movement who paths she crossed . . . . An engrossing read." -- Chicago Tribune"Phil Hoose, who has done pioneering work in bringing to our attention the crucial role of young people in social movements, here tells the extraordinary, yet little-known story of Claudette Colvin, who, even before the famous incident involving Rosa Parks, sparked the historic bus boycott in Montgomery, Alabama. Claudette Colvin was a remarkable teenager. With great courage she acted upon her principles -- and played a significant role in the drama of the civil rights movement. This is a story that if taught in every classroom in the nation, might well inspire a new generation of young activists to join the on-going struggle for social justice." -- Howard Zinn, author of A People's History of the United States"Phil Hoose's profile of the remarkable Claudette Colvin is MUST reading for anyone still imbued with hope. She is a lighthouse in a stormy sea." -- Studs Terkel, Pulitzer Prize winning author of The Good War"Today, thanks to Hoose, a new generation of girls--and boys--can add Claudette Colvin to their list of heroines." -- Christian Science Monitor"Hoose writes in a fluid, easy style and weaves in many voices of the time. He captures the tension and explosive emotions in the pivotal scenes." -- Sacramento Bee"Hoose's evenhanded account investigates Colvin's motives and influences, and carefully establishes the historical context so that readers can appreciate both Colvin's maturity and bravery and the boycott leadership's pragmatism." -- Publishers Weekly, Starred Review"Hoose encourages teens to empathize with an age peer, once dismissed as too 'emotional' to withstand public scrutiny, who later testified in the federal lawsuit that would finally end discrimination on public transportation." -- Bulletin of the Center for Children's Books, Starred Review"This inspiring title shows the incredible difference that a single young person can make." -- Booklist, Starred Review"Smoothly weaves excerpts from Hoose's extensive interviews with Colvin and his own supplementary commentary." -- Bulletin of the Center for Children's Books, Starred Review"Inspiring." -- Kirkus Reviews"Outstanding." -- School Library Journal, Starred Review"Hoose reasserts her [Claudette Colvin] place in history with this vivid and dramatic account, complemented with photographs, sidebars, and liberal excerpts from interviews conducted with Colvin." -- The Horn Book, Starred Review"This stirring account affirms Colvin's rightful place in history and gives young people a reason to stand up for what's right, even if the laws are not." -- Shelf Awareness"This fresh look at a well-documented period in American history will appeal to readers from young teens to adults." -- VOYA"In Claudette Colvin: Twice Toward Justice young readers finally get to hear Claudette Colvin's story in her own words, giving them a detailed look at segregated life in 1950s Montgomery, Alabama, and showing them how one teenager helped change the world." -- Marian Wright Edelman, President, Children's Defense Fund"Through interviews with Colvin and others, Hoose delves into the details behind this largely unknown incident, ensuring that readers will have Colvin's courageous story forever seared into their memories." -- The Horn Book, a Fanfare 2009 book

When it comes to justice, there is no easy way to get it. You can't sugarcoat it. You have to take a stand and say, 'This is not right.' - Claudette Colvin

On March 2, 1955, an impassioned teenager, fed up with the daily injustices of Jim Crow segregation, refused to give her seat to a white woman on a segregated bus in Montgomery, Alabama. Instead of being celebrated as Rosa Parks would be just nine months later, fifteen-year-old Claudette Colvin found herself shunned by her classmates and dismissed by community leaders. Undaunted, a year later she dared to challenge segregation again as a key plaintiff in Browder v. Gayle, the landmark case that struck down the segregation laws of Montgomery and swept away the legal underpinnings of the Jim Crow South.

Based on extensive interviews with Claudette Colvin and many others, Phillip Hoose presents the first in-depth account of an important yet largely unknown civil rights figure, skillfully weaving her dramatic story into the fabric of the historic Montgomery bus boycott and court case that would change the course of American history.

Phillip Hoose is an award-winning author of books, essays, stories, songs and articles. Although he first wrote for adults, he turned his attention to children and young adults in part to keep up with his own daughters. His book Claudette Colvin won a National Book Award and was dubbed a Publisher's Weekly Best Book of 2009. He is also the author of Hey, Little Ant, co-authored by his daughter, Hannah; It's Our World, Too!; The Race to Save the Lord God Bird; The Boys Who Challenged Hitler; and We Were There, Too!, a National Book Award finalist. He has received a Jane Addams Children's Book Award, a Christopher Award, a Boston Globe-Horn Book Award, and multiple Robert F. Sibert Honor Awards, among numerous honors. He was born in South Bend, Indiana, and grew up in the towns of South Bend, Angola, and Speedway, Indiana. He was educated at Indiana University and the Yale School of Forestry. He lives in Portland, Maine.