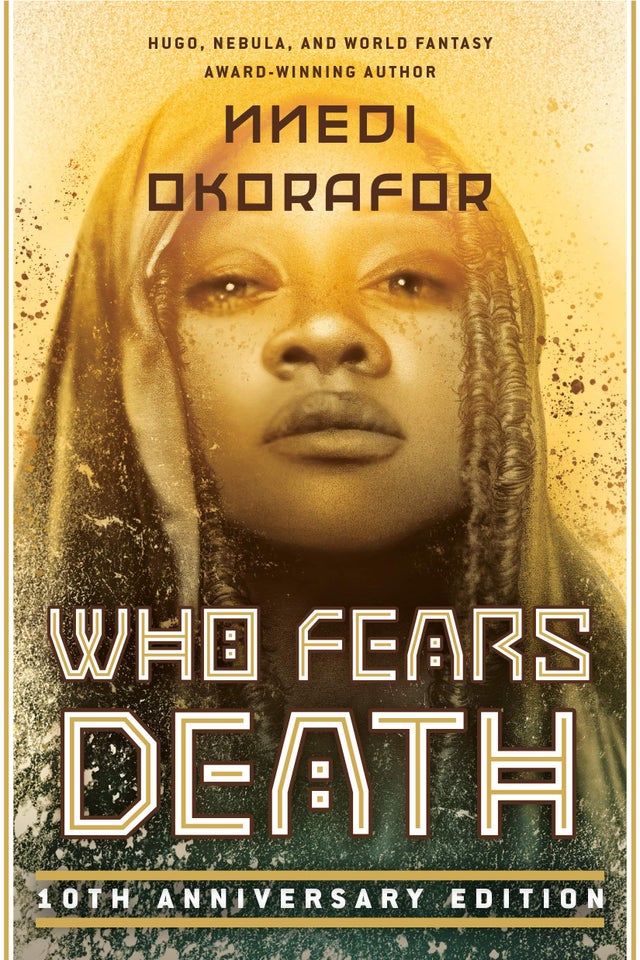 Who Fears Death by Nnedi Okorafor

Nnedi Okorafor is a Nigerian-American author of Africanfuturism and Africanjujuism for children and adults. Her works include WHO FEARS DEATH (in development at HBO into a TV series), the BINTI novella trilogy, THE BOOK OF PHOENIX, the AKATA books and LAGOON. She is the winner of Hugo, Nebula, World Fantasy, Locus and Lodestar Awards and her debut novel ZAHRAH THE WINDSEEKER won the prestigious Wole Soyinka Prize for Literature. Her next novel, IKENGA, will be in stores August 2020.

Praise for Who Fears Death" Haunting and absolutely brilliant. My heart and guts are all turned inside out." --John Green, New York Times-bestselling author of The Fault in Our Stars" Who Fears Death is one of the most striking, chilling, truly fascinating, and all-around remarkable novels I've read in a very long time." --Peter S. Beagle, bestselling author of The Last Unicorn"Nnedi Okorafor is American-born but her Nigerian blood runs strong, lacing her work with fantasy, magic and true African reality. Many people need to read Who Fears Death, it's an important book." --Nawal El Saadawi, bestselling author of Woman at Point Zero"To compare author Nnedi Okorafor to the late Octavia E. Butler would be easy to do, but this simple comparison should not detract from Okorafor's unique storytelling gift." -- New York Journal of Books"Both wondrously magical and terribly realistic." -- The Washington Post" Believable, nuanced characters of color and an unbiased view of an Africa full of technology, mysticism, culture clashes and true love." -- Ebony Magazine (editor's pick)"A fantastical, magical blend of grand storytelling." -- Publishers Weekly (starred review)"Beautifully written, this is dystopian fantasy at its very best. Expertly exploring issues of race, gender, and cultural identity, Okorafor blends future fantasy with the rhythm and feel of African storytelling. " -- Library Journal (starred review)"Her pacing is tight. Her expository sections sing like poetry. Descriptions of paranormal people and battles are disturbingly vivid and palpable. But most crucial to the book's success is how the author slowly transforms Onye's pursuit of her rapist father from a personal vendetta to a struggle to transform the social systems that created him." -- The Village Voice

"Okorafor is a master storyteller who combines recent history, fantasy, tradition, advanced technology, and culture into something wonderful and new that should not be missed." -- RT Book Review (top pick)

Now optioned as a TV series for HBO, with executive producer George R. R. Martin!An award-winning literary author enters the world of magical realism with her World Fantasy Award-winning novel of a remarkable woman in post-apocalyptic Africa.In a post-apocalyptic Africa, the world has changed in many ways; yet in one region genocide between tribes still bloodies the land. A woman who has survived the annihilation of her village and a terrible rape by an enemy general wanders into the desert, hoping to die. Instead, she gives birth to an angry baby girl with hair and skin the color of sand. Gripped by the certainty that her daughter is different-- special--she names her Onyesonwu, which means "Who fears death?" in an ancient language.It doesn't take long for Onye to understand that she is physically and socially marked by the circumstances of her conception. She is Ewu--a child of rape who is expected to live a life of violence, a half-breed rejected by her community. But Onye is not the average Ewu. Even as a child, she manifests the beginnings of a remarkable and unique magic. As she grows, so do her abilities, and during an inadvertent visit to the spirit realm, she learns something terrifying: someone powerful is trying to kill her.Desperate to elude her would-be murderer and to understand her own nature, she embarks on a journey in which she grapples with nature, tradition, history, true love, and the spiritual mysteries of her culture, and ultimately learns why she was given the name she bears: Who Fears Death.