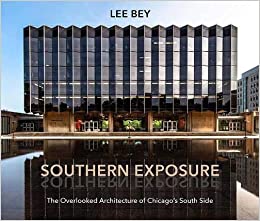 Southern Exposure : The Overlooked Architecture of Chicago's South Side by Lee Bey

"Chicago's South Side is usually viewed as a place to flee or avoid. It's been that way since the early 1900s when the rich traded their South Side mansions on Prairie Avenue and the former Grand Boulevard for even swankier digs on the North Side's Gold Coast. And when thousands of whites left the South Side during the racial change of the 1960s and 1970s. The exodus continues now as nearly 200,000 residents--most of them black--have left the South Side since 2000, chased out by crime, disinvestment and perennially troubled public schools. The South Side's remarkable contributions to art and design have been lost in this stampede. In America's leading city of architecture, most of Chicago's best place and spaces outside of downtown are on the South Side. Unfortunately, while a relative few have been individually celebrated, the architectural press, tourists, and many Chicagoans and architecture aficionados have overlooked the idea of the South Side as home of a significant architecture. "Southern Exposure: The Architecture of Chicago's South Side" is the first book devoted to this rich vein of quality architecture and urban design. Spotlighting more than 60 significant places and spaces across the South Side, the book features the work by world famous luminaries such as Frank Lloyd Wright, Daniel Burnham, Eero Saarinen, and landscape architect Frederick Law Olmstead--designs largely unseen because they are on the South Side. Pioneering architects such as W.T. Bailey, John Moutoussamy and the firm Ryder Morrison & Margerum--black designers whose has been ignored because it is on the South Side and because of outright racism--will be profiled as well, alongside dozens of remarkable examples of design that are largely absent from the city's story"--Provided by publisher.