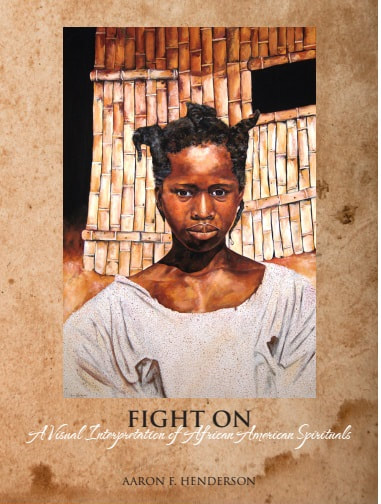 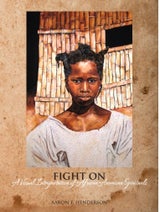 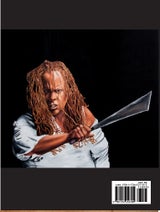 Please note: The shipping price for this book is $10.00 via Priority Mail. Should you check out with a different rate, we will email to request the correct amount.

Read our review on this book on our blog here: Fight On

Pictured: Fight On Cover, Back Cover, and author

Aaron F. Henderson is a narrative fine artist whose art reflects his love of history and African and African American culture. An alumnus of Tuskegee Institute now Tuskegee University, he earned a B. S. in Electrical Engineer and credits his experience there for shaping him into the respected and popular artist that he is. His work is currently divided among twelve series of realistic and representational paintings expressed in vivid colors of gouache and oil paint on canvas and paper. He draws on themes of social justice issues, history, and his love of reading. His dedication to his craft and to professionalism led to making his art a family business called Premier Art, Inc. and ZuCot Gallery.

Fight On - brings together three dynamic elements to tell the story of the African American Spirituals tradition: Sixty-three paintings from a series by Aaron F. Henderson, the lyrics of fifty-five spiritual songs, and narrative writings by scholars of art and culture, and Henderson himself. The elements come together to make this more than an art book, a lyric book, autobiography or cultural commentary. Fight On is a celebratory document of African American culture, giving evidence of how Black people in a nation that grew rich and powerful on the strength of their unpaid labor survived and liberated themselves.

Fight On reveals how music has served as medicine, spiritual sustenance and a means of communication for Black people in general, and himself in particular. He studies great African American thinkers, such as W. E. B. Du Bois who in The Souls of Black Folk called spirituals sorrow songs that "articulate messages of the slave to the world," messages of suffering, despair, freedom, faith, hope, and the power of the spirit. Henderson references Frederick Douglass who wrote about the double meanings in their words and how every tone was a testimony against slavery, and a prayer to God for deliverance from chains. The paintings in Fight On show us the spirit of Harriet Tubman who used the spirituals as a signal of her arrival to facilitate the escape of others by way of the Unerground Railroad. The songs kept people working in the fields, on the railroads and marching during the civil rights movement. The songs are the foundation of Black music, i.e., blues, jazz, R&B, gospel, Rock & Roll, rap, and hip hop. Du Bois said it this way, "by fateful chance the Negro folksong---the rhythmic cry of the slave---stands today not simply as the sole American music, but as the most beautiful expression of human experience born this side the seas. The songs are the foundation for all America music which has become, in the minds of many, America's greatest gift to world culture."