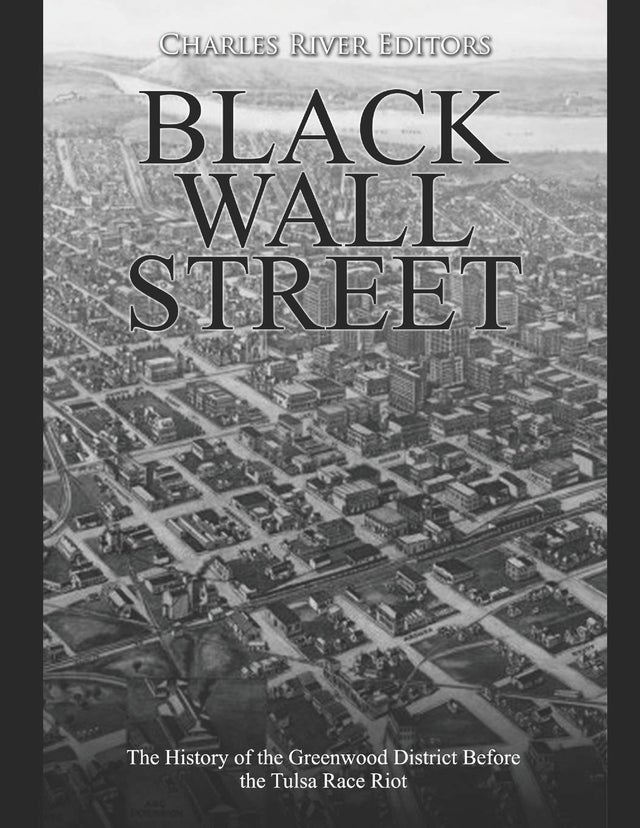 Black Wall Street: The History of the Greenwood District Before the Tulsa Race Riot by Charles River

In the wake of the Civil War, African Americans attained freedom from chattel slavery, but continued to suffer discrimination both legal in the form of Jim Crow laws and de facto in the continued perception among the vast majority of white Americans that African Americans were at the very least inferior and at the most a constant dangerous presence in their communities who must be carefully controlled. In this way, Tulsa was no different than most cities in the region in the 1920s.Overall, Tulsa in 1921 was considered a modern, vibrant city. What had fueled this remarkable growth was oil, specifically the discovery of the Glenn Pool oil field in 1905. Within five years, Tulsa had grown from a rural crossroads town in the former Indian Territory into a boomtown with more than 10,000 citizens, and as word spread of the fortunes that could be made in Tulsa, people of all races poured into the city. By 1920, the greater Tulsa area boasted a population of over 100,000. In turn, Tulsa's residential neighborhoods were some of the most modern and stylish in the country, and the Tulsa Chamber of Commerce produced postcards and literature boasting of the virtues of life in their modern oil city. However, as a commission report about the Tulsa Riot later pointed out, "What the pamphlets and the picture postcards did not reveal was that, despite of its impressive new architecture and its increasingly urbane affectations, Tulsa was a deeply troubled town. As 1920 turned into 1921, the city would soon face a crossroads that, in the end, would change it forever...Tulsa was, in some ways, not one city but two."

When they came to Tulsa, many blacks settled in the Greenwood area and established a thriving commercial, cultural, and residential area. Of course, the segregation was forced on these residents, and while they had fled the worst conditions of the Jim Crow South in other areas, they were not able to escape it completely. But in one way, Tulsa was different for African Americans, as black citizens of the city shared in the city's wealth, albeit not as equally as their white neighbors. The Greenwood district, a 36 square block section of northern Tulsa, was considered the wealthiest African American neighborhood in the country, called the "Black Wall Street" because of the large number of affluent and professional residents. In the 2001 final report of the Oklahoma Commission to Study the Tulsa Race Riot of 1921, historians John Hope Franklin and Scott Ellsworth described the Greenwood area that would be all but destroyed in one of America's most notorious riots: "In less than twenty-four hours, nearly all of Tulsa's African-American residential district--some forty-square-blocks in all--had been laid to waste..."

Tragically, the decades following the riot saw the memory of it recede into the background. The Tulsa Tribune did not recognize the riot in its "Fifteen Years Ago Today" or "Twenty-five Years Ago Today" features. In 1971, the Tulsa Chamber of Commerce decided to commemorate the riot, but when they read the materials gathered by Ed Wheeler about the riot, they refused to publish any of it, and the Tulsa papers also refused to run Wheeler's story. He finally published an article in a black magazine, Impact Magazine; but most of Tulsa's white citizens never knew about it. It would not be until recently that a true accounting of the riot and its damage have been conducted, and as the 100th anniversary of the massacre approaches in 2021, the city of Tulsa is still working to complete the historical record.

Black Wall Street: The History of the Greenwood District Before the Tulsa Race Riot examines the conditions and events that led to the rise of the district and what life was like there. Along with pictures depicting important people, places, and events, you will learn about Black Wall Street like never before.