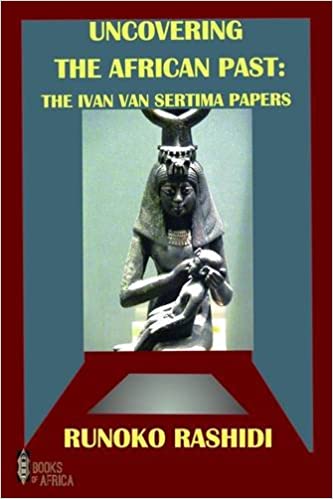 UNCOVERING THE AFRICAN PAST: THE IVAN VAN SERTIMA PAPERS by Runoko Rashidi

This is the third in a trilogy by the well-known African-American scholar, Runoko Rashidi. In the first two volumes which have sold well, Black Star: The African Presence in Early Europe, and African Star over Asia: The African Presence in the East he interpreted the work of earlier scholars and provided new evidence of the important historical role of Black people in Europe and Asia. This new book pays tribute to the great scholar, Ivan Van Sertima, author of They Came before Columbus and founder of the Journal of African Civilizations. It brings together the author’s own research and that of Van Sertima and other Black scholars including Chancellor Williams, William Leo Hansberry, John G. Jackson and Cheikh Anta Diop. It discusses the origins, the nature and the historical development of the Nile Valley civilisations, providing details of the dynasties. It throws light on African links with Sumer, South Asia and, not least, the Olmec and their successors in Mexico. It punctures several racial myths including those relating to anthropological theory.

Introductory overview by Charles S. Finch, M.D. and tribute to Ivan Van Sertima and his work

The Journal of African Civilizations: pioneer works on African contributions to the world

A chronology of all the dynasties

The persistence of racial myths in physical anthropological theory

Chancellor J. Williams and the reconstruction of African history

Interviews with John G. Jackson on Man, God and Civilization

The arguments in the book are backed up by 65 excellent colour illustrations. There is a detailed bibliography and an important note on the photographs.