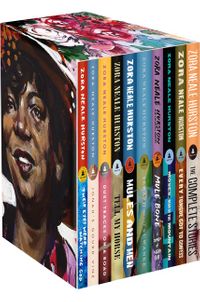 "One of the greatest writers of our time."--Toni Morrison

Zora Neale Hurston's work brilliantly captured the experience of American Black life in the early twentieth century and transformed the boundaries of modern literature. This boxed set features the best of her fiction and nonfiction in one extraordinary, giftable package.

The Complete Stories--a collection of Zora's most popular short fiction

Moses, Man of the Mountain--a compelling allegory of power, redemption, and faith that blends the Moses of the Old Testament with the Moses of black folklore and song

Seraph on the Suwanee--a novel examining a complicated marriage

A tribute to one of our greatest writers and a major figure in the Harlem Renaissance, Zora Neale Hurston Boxed Set is essential for devoted collectors of her writing, an opportunity for fans to rediscover her genius, and a rich wellspring for readers new to her canon.

Zora Neale Hurston was a novelist, folklorist, and anthropologist. An author of four novels (Jonah's Gourd Vine, 1934; Their Eyes Were Watching God, 1937; Moses, Man of the Mountain, 1939; and Seraph on the Suwanee, 1948); two books of folklore (Mules and Men, 1935, and Tell My Horse, 1938); an autobiography (Dust Tracks on a Road, 1942); and over fifty short stories, essays, and plays. She attended Howard University, Barnard College and Columbia University, and was a graduate of Barnard College in 1927. She was born on January 7, 1891, in Notasulga, Alabama, and grew up in Eatonville, Florida. She died in Fort Pierce, in 1960. In 1973, Alice Walker had a headstone placed at her gravesite with this epitaph: "Zora Neale Hurston: A Genius of the South."