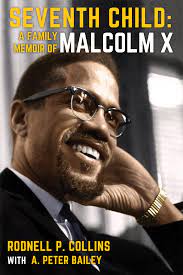 Seventh Child: A Family Memoir of Malcolm X is a valuable contribution to our knowledge of a great and controversial figure. No other book about Malcolm X - and there have been more than forty, in eight different languages - provides such enlightenment on the man, except, of course, his own autobiography. Told by loving sister Ella Little Collins, who knew Malcolm X better than anyone else, and her son, Rodnell P. Collins, to whom Malcolm X was a much-loved and admired uncle and mentor, Seventh Child adds immeasurably to our knowledge of the man.

Sister Ella's tough love for and tenacious loyalty to her brother permeate the entire book. It was she who took him into her home after his father was lynched and his mother was institutionalized following a nervous breakdown. It was she who went into the streets of Boston looking for him when he was a rebellious teenager. It was she who arranged for his transfer to a progressive prison where he began to develop his intellectual skills. It was she who paid for his trip to the holy city of Mecca. It was to her that he confided his growing concerns about the rampant corruption in the Nation of Islam headquarters in Chicago.

Rodnell P. Collins, the nephew of Malcolm X, is a computer systems analyst, currently lives in Boston with his wife and two children in the house in which Malcolm X lived as a teenager.

A. Peter Bailey, who assisted Alvin Ailey in writing his autobiography, Revelations, was a pallbearer at Malcolm X's funeral. He lives in Washington, D.C.

A uniquely intimate portrait of Malcolm X not just as a revolutionary leader, but as a complex family man, told through personal stories, memories, and rare family photos from his sister and nephew.A N INSIDER'S STUDY OF AN AFRICAN-AMERICAN ICON

No other book about Malcolm X offers such enlightenment on the man who was not just a great leader, but a beloved brother, cousin, nephew, uncle, father, husband, and friend. As politically relevant today as he was during his lifetime, Malcolm X also remains a controversial figure alternately mythologized and misunderstood.Ella Little Collins saw her brother Malcolm through some of the most significant times of his life, and knew him better than anyone else. Here she shares her poignant, vivid memories of him. Told to her son, Rodnell, to whom Malcolm was a much-loved uncle and mentor, Seventh Child contains haunting, bitter, as well as joyful recollections, and deeply personal insights.Seventh Child also provides remarkable details about Malcolm's family genealogy previously unavailable to the general public, and rare family photos--including one of Rodnell with Malcolm the night before his assassination. As informative as it is intimate, Seventh Child adds immeasurably to our knowledge of this complex and extraordinary figure.