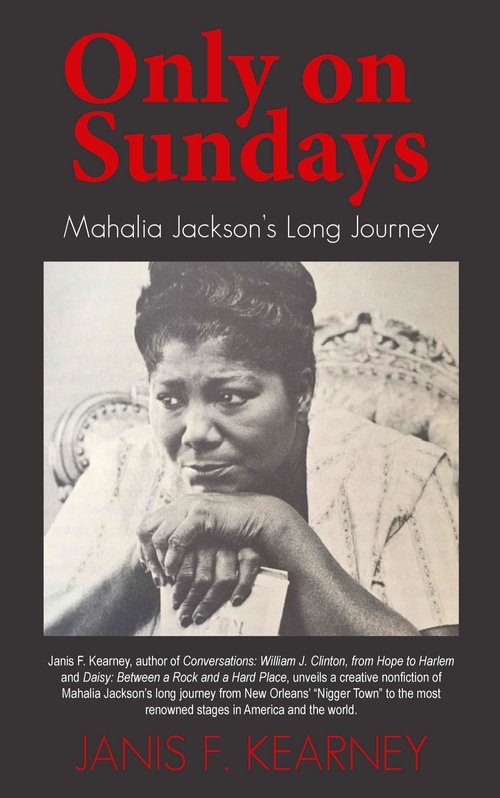 Only on Sundays: Mahalia Jackson's Long Journey is a look back at the turn of the 20th century in America, and one black southern woman's struggle to attain the American dream. The song Mahalia Jackson is best known for, Nobody knows the Troubles I've Seen, could have been written for Jackson's journey out of Nigger Town, New Orleans to Chicago's Promised Land. Her struggles didn't stop in Chicago, the struggles never ended. After 30 years of fighting for acceptance from both Black and white America, she miraculously achieved the recognition, the wealth, the security that had been a dream for so long. It wasn't, however, until she met the Reverend Martin Luther King, Jr. that she would begin her fight for social justice for all Americans.

Autor Bio: Janis Faye Kearney grew up in rural Arkansas, the daughter of cotton sharecroppers. The author and publisher writes about hers and other southerners' lives through short stories, memoir, autobiography, biography, and fiction. She has been writing all her life, but began her writing life in earnest in 2001. Janis attended and graduated from the University of Arkansas at Fayetteville with a B.A. in Journalism. She credits Arkansas Poet Millier Williams, Civil rights leader Daisy Gatson Bates, and her father TJ Kearney for the path she chose to write stories in hopes of changing the world. Janis served as publisher of the historical Arkansas State Press founded by civil rights legends Daisy Gatson Bates and L.C. Bates, and as Personal Diarist to America's 42nd President William J. Clinton. In 2014, after the death of literary icon Maya Angelou, she founded the Celebrate! Maya Project, a 501.C.3 nonprofit, which serves as a bridge for young people in search of their own voices, and a forum for youth to learn their history and create their own stories, through writing workshops, literary competition, and public forums. Janis was inducted into the Arkansas Writers Hall of Fame in 2016, and in 2014, received the prestigious University of Arkansas Lemke Journalism Award. She resides in Little