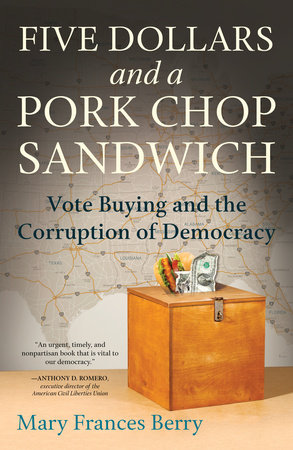 Vote Buying and the Corruption of

Dr. Mary Frances Berry is the Geraldine R. Segal Professor of American Social Thought and professor of history at the University of Pennsylvania. She is the former chairwoman of the US Commission on Civil Rights, the author of eleven books, and the recipient of thirty-five honorary degrees. Dr. Berry has appeared on Real Time with Bill Maher, The Daily Show, Tavis Smiley, PBS NewsHour, CBS Evening News, Al Jazeera America News, and various MSNBC and CNN shows.

"As the former chair of the U.S. Commission on Civil Rights, the author has seen expansion of voting rights lead to more voter suppression and actually cause vote counts to decline...Berry helpfully exposes disturbing facts from across the country."

-- Kirkus Reviews"Thank goodness for Mary Frances Berry. At 78, the former chairperson of the U.S. Commission on Civil Rights shows no signs of slowing down. In her latest book, Five Dollars and a Pork Chop Sandwich: Vote Buying and the Corruption of Democracy, Berry exposes election fraud, from vote buying to absentee ballots in communities that we call home."

-- Essence Magazine"Dr. Mary Frances Berry states in this urgent book that 'free and fair elections are a democratic ideal.' Laying out the history and nature of vote buying, voter suppression, voter intimidation, and turnout, Dr. Berry shows that, rather than being a lock-step march toward greater 'inclusion' in voting, the United States exemplifies a push-pull phenomenon--sometimes expanding the franchise and other times restricting it. Above all, Dr. Berry's work instructs us to be vigilant: if we are to have our democracy live up to its potential, it is up to us to stop restrictive laws and work to expand the franchise fairly at the local, state, and federal levels."

--Donna Brazile, veteran Democratic strategist and Democratic National Committee's vice chair for Voter Registration and Participation"Mary Frances Berry uncovers a type of voter suppression that many readers will be shocked and outraged to learn exists in twenty-first-century America. Five Dollars and a Pork Chop Sandwich is an urgent, timely, and nonpartisan book that is vital to our democracy."

A timely and nonpartisan book on voter manipulation and electoral corruption--and the importance of stimulating voter turnout and participationThough voting rights are fundamental to American democracy, felon disfranchisement, voter identification laws, and hard-to-access polling locations with limited hours are a few of the ways voter turnout is suppressed. These methods of voter suppression are pernicious, but in Five Dollars and a Pork Chop Sandwich, Dr. Mary Frances Berry focuses on forms of corruption including vote buying, vote hauling, the abuse of absentee ballots, and other illegal practices by candidates and their middlemen, often in collusion with local election officials.Vote buying--whether it's for a few dollars, a beer, or a pack of cigarettes--is offered to individual citizens in order to ensure votes for a particular candidate, and Dr. Berry notes it occurs across party lines, with Republicans, Democrats, and independents all participating.Dr. Berry shares the compelling story of Greg Malveaux, former director of Louisiana's Vote Fraud Division, and how this "everyman" tried to clean up elections in a state notorious for corruption. Malveaux discovered virtually every type of electoral fraud during his tenure and saw firsthand how abuses occurred in local communities--from city councils to coroners' offices. In spite of Sisyphean persistence, he found it virtually impossible to challenge the status quo. Dr. Berry reveals how this type of electoral abuse is rampant across the country and includes myriad examples from other states, including Illinois, Texas, Florida, Kentucky, and Mississippi.Voter manipulation is rarely exposed and may be perceived as relatively innocuous, however; Dr. Berry observes that in addition to undermining basic democracy, it also leads to a profound lack of accountability and a total disconnect between politicians and their constituents, and that those in poor and minority communities are the most vulnerable. While reforming campaign finance laws are undeniably important to our democracy, being attuned to issues of structural powerlessness and poverty, and to the cycles that perpetuate them, is no less crucial.In Five Dollars and a Pork Chop Sandwich, Dr. Berry shares specific successful voting strategies that other countries have adopted and urges creativity in rewarding people for voting. She also underscores the continued importance of grassroots education, so that citizens see voting as desirable and empowering--as a tool to help create the kind of environment they deserve.