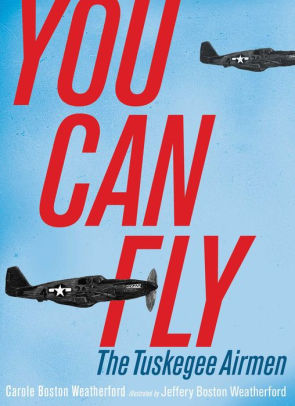 You Can Fly: The Tuskegee Airmen by Carole Weatherford

This history in verse celebrates the story of the Tuskegee Airmen: pioneering African-American pilots who triumphed in the skies and past the color barrier.

"This book sheds light on the Tuskegee Airmen through stories filled with authentic voices and hard truths. For those who already know of the Airmen's accomplishments, the book offers a more personal connection to the men and their ideas and feelings through poems . . . which demonstrate that despite their proven skill and heroism, the aviators were still denied acceptance and respect."-- "School Library Journal"

"The narrative voice draws readers into the action, addressing them directly and inviting them to imagine themselves into this ground-breaking role . . . this title is particularly well adapted to classroom use, where language arts and history students can share common air space."--Publishers Weekly, starred review "BCCB"

"Weatherford's informative, evocative poems follow the Airmen from the early vision . . . to the flyers' experiences at home and abroad, with poems about Joe Louis and Lena Horne reminding us that the Airmen were also fighting another war in this country--against prejudice."--Publishers Weekly, starred review "Horn Book"

"This volume offers a vivid, personal point of view. A welcome addition to traditional books on the Tuskegee Airmen."--Booklist "April 1, 2015"

Award-winning author Carole Boston Weatherford's innovative history in verse celebrates the story of the Tuskegee Airmen: pioneering African-American pilots who triumphed in the skies and past the color barrier.I WANT YOU! says the poster of Uncle Sam. But if you're a young black man in 1940, he doesn't want you in the cockpit of a war plane. Yet you are determined not to let that stop your dream of flying.So when you hear of a civilian pilot training program at Tuskegee Institute, you leap at the chance. Soon you are learning engineering and mechanics, how to communicate in code, how to read a map. At last the day you've longed for is here: you are flying!From training days in Alabama to combat on the front lines in Europe, this is the story of the Tuskegee Airmen, the groundbreaking African-American pilots of World War II. In vibrant second-person poems, Carole Boston Weatherford teams up for the first time with her son, artist Jeffery Weatherford, in a powerful and inspiring book that allows readers to fly, too.