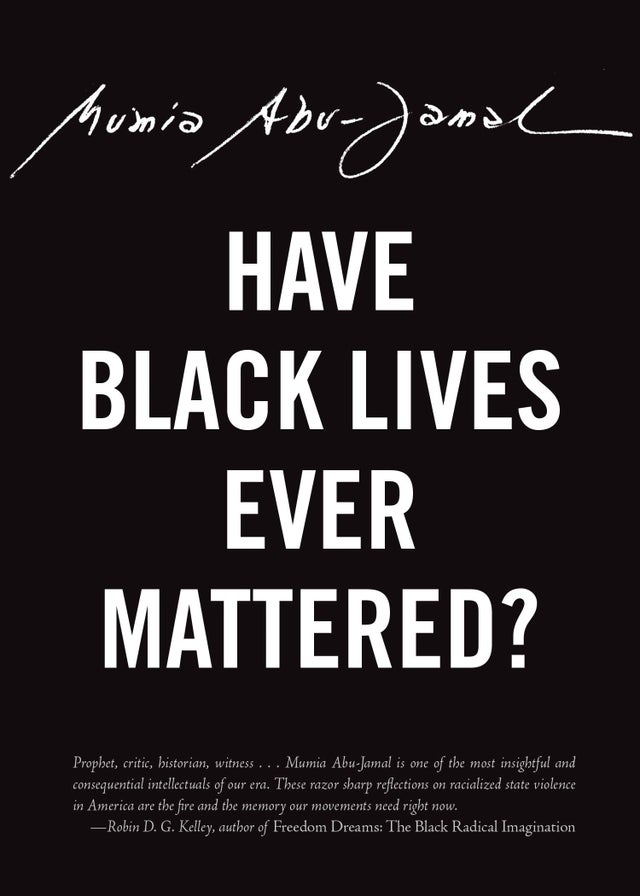 Have Black Lives Ever Mattered? by Mumia Abu Jamal

A powerful indictment on the history of police violence against people of color, from slavery to today's Black Lives Matter.

"In December 1981, Mumia Abu Jamal was shot and beaten into unconsciousness by Philadelphia police. He awoke to find himself shackled to a hospital bed, accused of killing a cop. He was convicted and sentenced to death in a trial that Amnesty International has denounced as failing to meet the minimum standards of judicial fairness. In [this book], Mumia gives voice to the many people of color who have fallen to police bullets or racist abuse, and offers the post-Ferguson generation advice on how to address police abuse in the United States"--Provided by publisher.

MUMIA ABU-JAMAL is an award-winning journalist and author of two best-selling books, Live From Death Row and Death Blossoms, which address prison life from a critical and spiritual perspective. In 1981 he was elected president of the Association of Black Journalists (Philadelphia chapter). That same year he was arrested for allegedly killing a white police officer in Philadelphia. He was convicted and sentenced to death in 1982, in a process that has been described as an epic miscarriage of justice. In 2011, after spending more than 28 years on death row, his death sentence was vacated when the Supreme Court allowed to stand the decisions of four federal judges who had earlier declared his death sentence unconstitutional. He is now serving a life sentence without the possibility of parole. In spite of his three-decade-long imprisonment, most of which was spent in solitary confinement on Death Row, Abu-Jamal has relentlessly fought for his freedom and for his profession. From prison he has written seven books and thousands of radio commentaries. He holds a BA from Goddard College and an MA from California State University, Dominguez Hills. His books have sold more than 100,000 copies and have been translated into seven languages.

"When enough time has passed, as in when what was staring us in the face can actually be acknowledged, it will be significant that one of the clearest voices on the injustice of our justice system has spent much of his life in prison, and by many accounts, wrongfully. Here Jamal directs his attention at other people who have suffered at the hands of justice, and tells their stories. What a remarkable thing to be doing from the heart of one's own ongoing travesty."--John Freeman, Literary Hub

"The columns list the roll call of victims in real time, from Abner Louima to Travyon Martin and beyond. This is a book containing examples of, as one column called it, 'legalized police violence, ' killings and abuse 'you pay for . . . every time you pay taxes, endur[ing] this every time you vote for politicians who sell out in an instant.' To Abu-Jamal, 'Americans are blind to everything but color' because 'United States history is a history of denial.'"--Todd Burroughs, "Drums in the Global Village"

"Capsulizing the history of white slave patrols, their relationship to today's police departments and a justice system that preserves immunity for officers who kill, Abu-Jamal goes on to suggest how and why we've arrived at such a horrific place in American history."--Denise Sullivan, Down With Tyranny

"With the recent acquittal of two more police officers in the deaths of unarmed black men, the question posed by the title of this book is as relevant as it ever was. Through a series of concise, clear essays, Mumia Abu-Jamal details the racism against blacks, comparing today's behaviors with the lynchings that were common in the south prior to the decade of the sixties. . . . Have Black Lives Ever Mattered? is powerful, disturbing, well-written, and an important book for our day."--Robert Fantina, New York Journal of Books

"In Have Black Lives Ever Mattered?, a recently published book by Abu-Jamal, he writes from his prison cell, taking readers on a journey from slavery's traumatizing past to the brutality of today's police state."--Roqayah Chamseddine, "Shadowproof"

Written from the perspective of someone who was shot by police, and who advocates for justice for himself and the police officer killed.

Mumia gives a voice to African Americans whose lives have been taken by police activity.

Mumia names our current political moment in order to transform it.

The national Black Lives Matter movement continues to grow and intensify in response to news of police killings of innocent people of color. Mumia is in many ways the moral, intellectual, and political mentor of this movement and the movement's involvement in spreading awareness of the book will add to its success.

Mumia is the world's most renowned political prisoner. A large and committed support base for his freedom, writings, and perspectives continues to grow as a result of his intellectual output and a constant flow of support work, media, and films about him and what he represents as an imprisoned black journalist and intellectual.

What makes this book particularly marketable is that it is accessible. Each of the 100 commentaries is short, focused, and well argued.

Most of the pieces have never been published in any form. Most were written to be heard as radio commentaries, commencement speeches, or as podcasts.

"I was fortunate to grow up in a community in which it was apparent that our lives mattered. This memory is the antidote to the despair that seizes one of my generation when we hear the words 'Black Lives Matter.' We want to shout: Of course they do! To you, especially. In this brilliant, painful, factual and useful book, we see to whom our lives have not mattered: the profit driven Euro-Americans who enslaved and worked our ancestors to death within a few years, then murdered them and bought replacements. Many of these ancestors are buried beneath Wall Street. Mumia Abu-Jamal's painstaking courage, truth-telling, and disinterest in avoiding the reality of American racial life is, as always, honorable."--Alice Walker

"Prophet, critic, historian, witness . . . Mumia Abu-Jamal is one of the most insightful and consequential intellectuals of our era. These razor sharp reflections on racialized state violence in America are the fire and the memory our movements need right now."--Robin D. G. Kelley, author of Freedom Dreams: The Black Radical Imagination

"Mumia Abu Jamal's clarion call for justice and defiance of state oppression has never dimmed, despite his decades of being shackled and caged. He is one of our nation's most valiant revolutionaries and courageous intellectuals. "-- Chris Hedges, Pulitzer-prize winning journalist and author of Wages of Rebellion: The Moral Imperative of Revolt

"This collection of short meditations, written from a prison cell, captures the past two decades of police violence that gave rise to Black Lives Matter while digging deeply into the history of the United States. This is the book we need right now to find our bearings in the chaos."

--Roxanne Dunbar-Ortiz, author of An Indigenous Peoples' History of the United States

In December 1981, Mumia Abu-Jamal was shot and beaten into unconsciousness by Philadelphia police. He awoke to find himself shackled to a hospital bed, accused of killing a cop. He was convicted and sentenced to death in a trial that Amnesty International has denounced as failing to meet the minimum standards of judicial fairness.

In Have Black Lives Ever Mattered?, Mumia gives voice to the many people of color who have fallen to police bullets or racist abuse, and offers the post-Ferguson generation advice on how to address police abuse in the United States. This collection of his radio commentaries on the topic features an in-depth essay written especially for this book to examine the history of policing in America, with its origins in the white slave patrols of the antebellum South and an explicit mission to terrorize the country's black population. Applying a personal, historical, and political lens, Mumia provides a righteously angry and calmly principled radical black perspective on how racist violence is tearing our country apart and what must be done to turn things around.

"[Mumia's] writings are a wake-up call. He is a voice from our prophetic tradition, speaking to us here, now, lovingly, urgently."--Cornel West

"He allows us to reflect upon the fact that transformational possibilities often emerge where we least expect them."--Angela Y. Davis