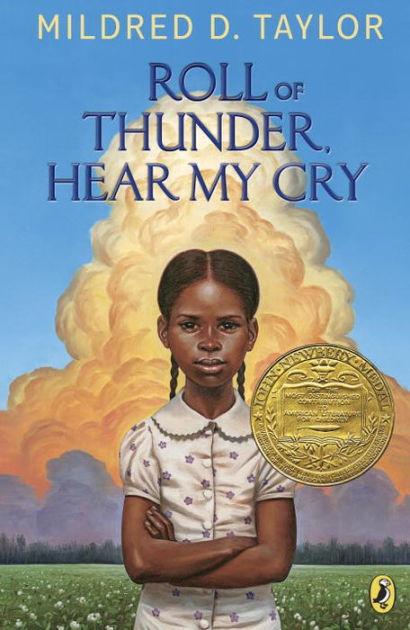 Roll of Thunder, Hear My Cry by Mildred D. Taylor

hardcover edition. The paperback is found at a separate link HERE.

Facing a year of night riders and burnings, Cassie and her family continue their struggle to keep their land and hold onto what rightfully belongs to them, despite the difficult battles they must continue to endure.

Mildred D. Taylor is the author of nine novels including The Road to Memphis, Let the Circle Be Unbroken, The Land, The Well, and Roll of Thunder, Hear My Cry. Her books have won numerous awards, among them a Newbery Medal (for Roll of Thunder, Hear My Cry), four Coretta Scott King Awards, and a Boston Globe--Horn Book Award. Her book The Land was awarded the L.A. Times Book Prize and the PEN Award for Children's Literature. In 2003, Ms. Taylor was named the First Laureate of the NSK Neustadt Prize for Children's Literature. Ms. Taylor now devotes her time to her family, writing, and what she terms "the family ranch" in the foothills of the Rocky Mountains.

Kadir Nelson is a two-time Caldecott Honor Award recipient. He has received an NAACP Image Award, a CASEY Award, the 2009 and 2014 Coretta Scott King Author Award, and the 2009 Robert F. Sibert Informational Book Award. Among Mr. Nelson's other awards are gold and silver medals from the Society of Illustrators. His work has appeared in The New York Times, Sports Illustrated, and The New Yorker. He lives in Los Angeles.

* "This [novel] grows with convincing detail of character and situation, punctuated by tension-building incidents ... Entirely through its own internal development, the novel shows the rich inner rewards of black pride, love, and independence."--Booklist, starred review

"The events and setting of the powerful novel are presented with such verisimilitude and the characters are so carefully drawn that one might assume the book to be autobiographical, if the author were not so young."-- The Horn Book"The strong, clear-headed Logan family... are drawn with quiet affection and their actions tempered with a keen sense of human fallibility."-- Kirkus Reviews, pointer review

Set in Mississippi at the height of the Depression, this is the story of one family's struggle to maintain their integrity, pride, and independence in the face of racism and social injustice. And it is also Cassie's story--Cassie Logan, an independent girl who discovers over the course of an important year why having land of their own is so crucial to the Logan family, even as she learns to draw strength from her own sense of dignity and self-respect.