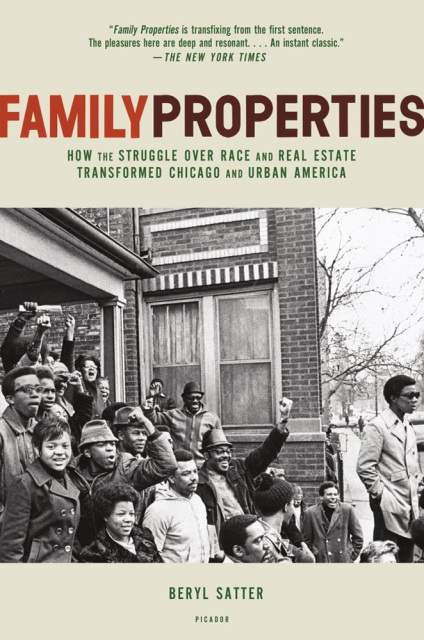 Autographed (while quantities last).  The "promised land" for thousands of Southern blacks, postwar Chicago quickly became the most segregated city in the North, the site of the nation's worst ghettos. In this powerful book, Beryl Satter identifies the true cause of the city's black slums and the ruin of urban neighborhoods throughout the country: a widespread institutionalized system of legal and financial exploitation.

Part family story and part urban history, "Family Properties" is the riveting account of a city in crisis, involving unscrupulous slumlords and speculators pitched against religious reformers, community organizers, and an impassioned attorney--the author's father-- who launched a crusade against the profiteers. Satter shows the interlocking forces at work: the discriminatory practices of the banking industry; the federal policies that created the country's shameful "dual housing market"; the economic anxieties that fueled white violence; and the tempting profits to be made by preying on the city's most vulnerable population.

A monumental work, this tale of racism and real estate, politics and finance will forever change our understanding of the forces that transformed urban America.  In 2010, Family Properties won the Organization of American Historian’s Liberty Legacy Award for best work in civil rights history and received recognition as one of the top 10 books of the year by the New York Times, the Washington Post, Booklist, the Newberry Library, and the Progressive magazine.