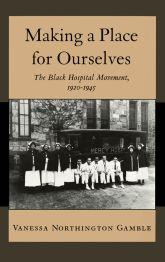 In a perfect world of medical science, hospitals would be value-neutral medical establishments, healing and treating all people in need equally. Hospitals, in addition to being medical facilities, are social institutions that reflect and reinforce the beliefs and values of the wider society. Making a Place for Ourselves examines an important but not widely chronicled event at the intersection of African-American history and American medical history - the black hospital movement. A practical response to the racial realities of American life, the movement was a "self-help" endeavor - immediate improvement of separate medical institutions insured the advancement and health of African Americans until the slow process of integration could occur. Recognizing that their careers depended on access to hospitals, black physicians associated with the two leading black medical societies, the National Medical Association (NMA) and the National Hospital Association (NHA), initiated the movement in the 1920s in order to upgrade the medical and education programs at black hospitals. Black physicians "made a place for themselves" within the profession of medicine by improving the status and training of black hospitals between 1920 and 1945, a time when few black physicians had options beyond the separate but equal black medical world. Vanessa Northington Gamble examines the activities of these physicians and those of black community organizations, local and federal governments, and major health care organizations. She focuses on three case studies (Cleveland, Chicago, and Tuskegee) to demonstrate how the black hospital movement reflected the goals, needs, and divisions within the African-Americancommunity - and the state of American race relations. Exploring ideological tensions within the black community over the existence of black hospitals, Gamble shows that black hospitals were essential for the professional lives of black physicians before the emergence of the civil rights movement. More broadly, Making a Place for Ourselves clearly and powerfully documents how issues of race and racism have affected the development of the American hospital system.