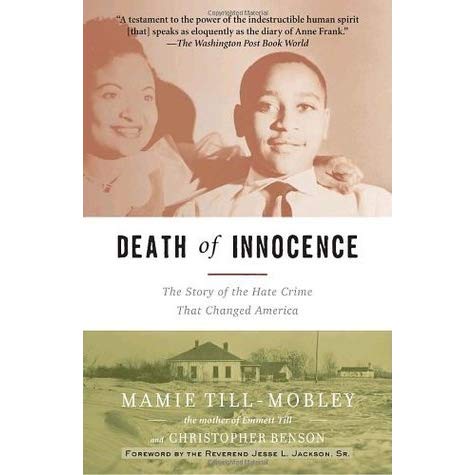 Death of Innocence by C. Benson and M. Mobley

The heart-wrenching, inspiring, and award-winning memoir by Mamie Till-Mobley, the mother of Emmett Till, an innocent 14-year-old boy who was in the wrong place at the wrong time and paid for it with his life. High school & older.

Mamie Till-Mobley died on January 6, 2003, at the age of eighty-one. Following the death of her only child, Emmett Till, she entered Chicago Teachers College in 1956, graduating cum laude and fifth in her class three and a half years later. In 1973, she earned a master's degree in administration and supervision at Loyola University. Till-Mobley was a frequent lecturer throughout the country, recalling the struggle for civil rights and urging her listeners to be the best they could be.A Chicago-based writer and lawyer, Christopher Benson has served as features editor for Ebony and as Washington editor for Ebony and Jet. He also contributed to The Washington Post, The Crisis, Chicago, and Reader's Digest. Benson is the author of the novel Special Interest.

There are many heroes of the civil rights movement--men and women we can look to for inspiration. Each has a unique story, a path that led to a role as leader or activist. "Death of Innocence is the heartbreaking and ultimately inspiring story of one such hero: Mamie Till-Mobley, the mother of Emmett Till--an innocent fourteen-year-old African-American boy who was in the wrong place at the wrong time, and who paid for it with his life. His outraged mother's actions galvanized the civil rights movement, leaving an indelible mark on American racial consciousness.

Mamie Carthan was an ordinary African-American woman growing up in 1930s Chicago, living under the strong, steady influence of her mother's care. She fell in love with and married Louis Till, and while the marriage didn't last, they did have a beautiful baby boy, Emmett.

In August 1955, Emmett was visiting family in Mississippi when he was kidnapped from his bed in the middle of the night by two white men and brutally murdered. His crime: allegedly whistling at a white woman in a convenience store. His mother began her career of activism when she insisted on an open-casket viewing of her son's gruesomely disfigured body. More than a hundred thousand people attended the service. The trial of J. W. Milam and Roy Bryant, accused of kidnapping and murdering Emmett (the two were eventually acquitted of the crime), was considered the first full-scale media event of the civil rights movement.

What followed altered the course of this country's history, and it was all set in motion by the sheer will, determination, and courage of Mamie Till-Mobley--a woman who would pull herself back from the brink of suicide to become ateacher and inspire hundreds of black children throughout the country.

Mamie Till-Mobley, who died in 2003 just as she completed this memoir, has honored us with her full testimony: "I focused on my son while I considered this book. . . . The result is in your hands. . . . I am experienced, but not cynical. . . . I am hopeful that we all can be better than we are. I've been brokenhearted, but I still maintain an oversized capacity for love." "Death of Innocence is an essential document in the annals of American civil rights history, and a painful yet beautiful account of a mother's ability to transform tragedy into boundless courage and hope.

"From the Hardcover edition.

"I am so thankful for the bravery and courage Mamie demonstrated when she shared her only child with the world. The news of Emmett's death caused many people to participate in the cry for justice and equal rights, including myself. The respect I have felt for her since 1955 will always live with me. She was blessed among women to carry the mantle with grace and dignity." --Rosa Parks" Death of Innocence reveals Mamie Till-Mobley for what she was: one of the greatest, but largely unsung, heroes in all of African-American history. Her words are powerful; her strength and vision in the face of the unspeakable horror of her son's death are astonishing. The life and work of Mamie Till-Mobley serves as an inspiration to all who love justice." --Stanley Nelson, executive producer and director of the documentary The Murder of Emmett Till"Mamie Till-Mobley has written a powerful book in which she reveals to us the life she shared with her son, Emmett Till, and her pride and joy as he became a remarkable young man. This story shows us how the cruelty of a few changed the life of a loving, caring mother and the history of a nation." --Kadiatou Diallo, author of My Heart Will Cross This Ocean: My Story, My Son, Amadou"An epic drama of despair and hope. The most powerful personal story, so far, from the civil rights movement." --Morris Dees, Southern Poverty Law Center"Mamie Till-Mobley has always deserved our admiration for her insistence that the world know her son's terrible fate, and for her determination to confront his killers in a Mississippi courtroom. Now, in the final act of her life, she gives us an account of the crime, its victim, and its aftermath that is as historically valuable as it is inspiring." --Philip Dray, author of At the Hands of Persons Unknown: The Lynching of Black America"In the pantheon of Black women I love and admire, Mamie Till-Mobley stands tall. Throughout her memoir...she is as fearless in sharing her life story as she was when she insisted on an open-casket funeral for her beloved son, Emmett. It was wise of Till-Mobley, who died earlier this year at 81, to wait until she could see the end of her journey to tell her story....Throughout her life, Till-Mobley never tried to cash in on her son's death. Instead, she tried to find a way to make sense of it. None of us can really know her pain, but through Death of Innocence we do know her grace. Her book is a story of faith and hope -- but not blind faith and hope; rather faith and hope as action, as being worthy of the challenge." --Nikki Giovanni

The mother of Emmett Till recounts the story of her life, her son's tragic death, and the dawn of the civil rights movement--with a foreword by the Reverend Jesse L. Jackson, Sr.In August 1955, a fourteen-year-old African American, Emmett Till, was visiting family in Mississippi when he was kidnapped from his bed in the middle of the night by two white men and brutally murdered. His crime: allegedly whistling at a white woman in a convenience store. The killers were eventually acquitted.What followed altered the course of this country's history--and it was all set in motion by the sheer will, determination, and courage of Mamie Till-Mobley, whose actions galvanized the civil rights movement, leaving an indelible mark on our racial consciousness. Death of Innocence is an essential document in the annals of American civil rights history, and a painful yet beautiful account of a mother's ability to transform tragedy into boundless courage and hope.Praise for Death of Innocence"A testament to the power of the indestructible human spirit [that] speaks as eloquently as the diary of Anne Frank." --The Washington Post Book World"With this important book, [Mamie Till-Mobley] has helped ensure that the story of her son (and her own story) will not soon be forgotten. . . . A riveting account of a tragedy that upended her life and ultimately the Jim Crow system." --Chicago Tribune"The book will . . . inform or remind people of what a courageous figure for justice [Mamie Till-Mobley] was and how important she and her son were to setting the stage for the modern-day civil rights movement." --The Detroit News"Poignant . . . In his mother's descriptions, Emmett becomes more than an icon; he becomes a living, breathing youngster--any mother's child." --Pittsburgh Post-Gazette"Powerful . . . [Mamie Till-Mobley's] courage transformed her loss into a moral compass for a nation." --Black Issues Book ReviewRobert F. Kennedy Book Award Special Recognition - BlackBoard Nonfiction Book of the Year