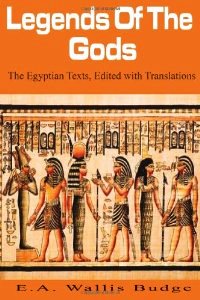 Legends of the Gods: The Egyptian Texts, Edited with Translations

Legends of the Gods originally published in 1912 by Egyptologist Alfred Wallis Budge. It also includes the Book of the Heavenly Cow, or The Legend of the destruction of mankind, an Ancient Egyptian text thought to have originated during the Amarna Period and, in part, describes the reasons for the imperfect state of the world in terms of humankind's rebellion against the supreme sun god Ra. Sir Ernest Alfred Thompson Wallis Budge (27 July 1857 - 23 November 1934) was an English Egyptologist, Orientalist, and philologist who worked for the British Museum and published numerous works on the ancient Near East.